CSD-Materials in action: identifying polymorphism in the anti-inflammatory drug Flunixin

Here we highlight a paper by authors at Universidad de los Andes, Universidad Industrial de Santander and Universidad Santo Tomás using the Cambridge Structural Database (CSD) and the Hydrogen Bond Propensity (HBP) tool to characterize two polymorphs of an anti-inflammatory drug and predict the existence of additional forms. This is part of our series highlighting examples of​​ the Cambridge Crystallographic Data Centre (CCDC) tools in action by scientists around the world.

Flunixin is a nonsteroidal anti-inflammatory drug (NSAID) commonly used in veterinary medicine. In this work, María Cecilia Dávila-Miliani et al. characterize two polymorphs of flunixin and further identify shared characteristics between flunixin and a similar therapeutic used in humans, called clonixin. The researchers suspected the existence of multiple polymorphs of flunixin (CSD refcode family CUGDAM) – since many similar drugs, including clonixin (CSD refcode family BIXGIY), display polymorphism. They used the Hydrogen Bond Propensity (HBP) tool included in the CSD-Materials suite to assess the likelihood of hydrogen bond formation in flunixin and then compared the results to known existing polymorphs of clonixin. As predicted by the hydrogen-bond propensity analyses, crystallization of flunixin in acetone and in acetone-hexane produced two conformational polymorphs. While an intramolecular hydrogen bond between the amine N-H and the carbonyl oxygen of the carboxylic group exists in both polymorphs, the intermolecular hydrogen-bond patterns differ. The form crystallized from acetone is characterized by the acid-pyridine heterosynthon, while the form crystallised in acetone-hexane displayed the acid-acid homosynthon. 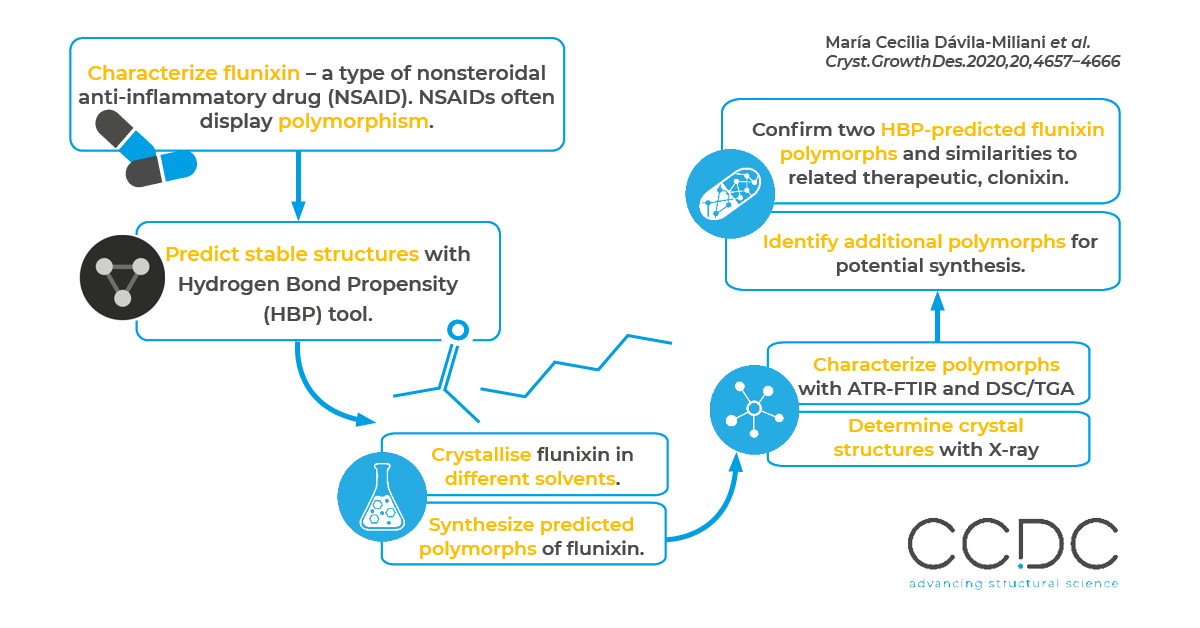 NSAIDs comprise a diverse family of compounds that inhibit enzymes involved in pain and inflammation responses. Their pain-relieving properties are thought to be related to the inhibition of Cyclooxygenase-2.  Clonixin in its lysine salt belongs to an important non-narcotic class of NSAIDs, called diarylamine derivatives. Several other important drugs belong to the class, including diclofenac, which had more than 9.5 million prescriptions in 2015 in the United States alone. Flunixin, a close relative of clonixin and the focus of this paper, has several applications, including use in food-producing animals and in horses competing in equestrian sports. Polymorphism is common in NSAIDs, which can complicate manufacturing and drug delivery efforts. Identifying polymorphs can help limit manufacturing risks and protect drug efficacy.

The researchers crystallised pure flunixin from flunixin-meglumine raw material using two different solvents: acetone and acetone-hexane. They then characterized the products with Attenuated Total Reflection-Fourier Transform Infrared (ATR-FTIR) and Differential Scanning Calorimetry and Thermogravimetric Analysis (DSC/TGA) and determined the crystal structures from powder and single-crystal X-ray diffraction. This confirmed the compounds' different conformations, which cause different hydrogen bonding patterns and different intermolecular interactions. By using the HBP tool in CSD-Materials, the researchers were able to identify two new possible polymorphs of flunixin exhibiting different hydrogen bond networks, which they were able to observed in the lab, while also assessing the potential formation of multicomponent materials. The HBP analysis further suggested additional polymorphs that the team can attempt to produce. For all the polymorphs of flunixin and clonixin, the HBP tool estimated an intramolecular hydrogen bond with the highest propensity involving the N2 from the secondary amine and a carboxylate oxygen. The team observed this intramolecular hydrogen bond in the two flunixin polymorphs and the four polymorphs of clonixin they examined.

Read the full paper: "Polymorphism in the Anti-inflammatory Drug Flunixin and Its Relationship with Clonixin" Cryst. Growth Des. 2020, 20, 4657−4666. Learn more about the HBP tool included in the Cambridge Structural Database Materials (CSD-Materials) suite. Explore more examples of CCDC tools in action. This paper represents work through CCDC's Frank H. Allen International Research and Education Programme (FAIRE), which supports structural chemistry research and education around the world. We are able to offer this analysis as a Healthcheck service where our expert team perform the analysis and you receive the results report days later. Email to enquire.