After more than 40 years, the long C-C bond in 5-cyano-1,3-didehydroadamantane (CTCDEC) has been re-determined.  The long bond between the bridgehead carbon atoms in the cyclopropane ring was originally reported in the paper by C.S.Gibbons and J.Trotter.[1] At 1.643(4) Å in length, it has been used as an example of a long C-C bond and is highlighted here by the yellow spheres. 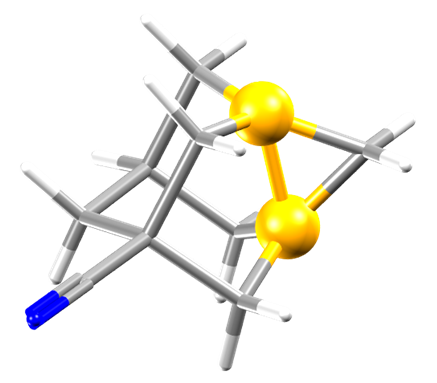 I recently read a new paper by Bremer et al.[2] where they discuss this compound and other similar compounds with inverted carbon geometries.  These structures have posed difficulties in trying to reproduce the bond lengths using a variety of DFT and ab initio calculations due to their strained rings and unusual electron density distributions.  Bremer et al. have re-determined the crystal structure of 5-cyano-1,3-didehydroadamantane (CTCDEC01) and have shortened the bond length to 1.584(2) Å.  While still on the long side this is much closer to the values generated by theoretical calculations. 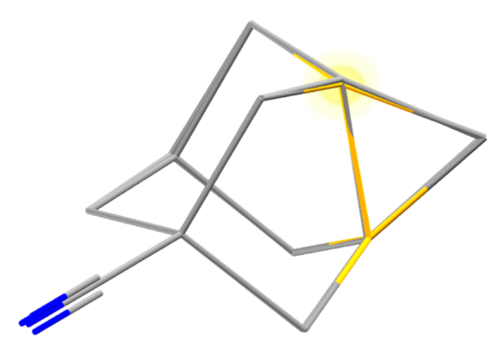 If we overlay the two structures, with yellow as the new bond, we can just about see the 0.059 Å difference in bond length.  This may sound like a very small difference, but when we look at the Mogul plots we can see what a large difference this makes.

Mogul allows us to compare this bond length with others in a similar environment that have been experimentally determined by X-ray-crystallography.[3]  When I ran the analysis on the original bond length it appears significantly longer than all others from similar fragments in the CSD. The one bit of green that can be seen at this length is for the structure itself in the CSD. Perhaps it should not be surprising that theoretical calculations struggle to predict such a long bond length when it is so far outside what has been experimentally determined elsewhere?

When I re-ran the plot for the bond for the new crystal structure, again using Mogul, we can see that the bond length is now much closer to the values observed for other structures.  The bond is still long but is within touching distance of the edge of the distribution and is no longer an outlier on its own.

This paper highlights how re-determination of an old structure can shed light on computational problems and while 5-cyano-1,3-didehydroadamantane may still be an unusual molecule, perhaps it is not quite as unusual as originally thought.