Testing times at the CCDC

This week heralds a major step in the process of producing the new Cambridge Structural Database System (CSD System) software ready for release at the end of the year, with the initial beta release going out to external testers. The annual CSD System release is probably one of the main tasks at the CCDC, involving almost every member of staff in one way or another. The organisation of the new CSD System software release actually began a couple of months ago in July, but it’s around this time that new features really start to take shape.

This year, in response to feedback from users we meet at events, or who contact our CCDC support staff, a lot of effort has been put into improving visualisation and image generation in Mercury (see below for examples of what to expect -  we’ll go into more detail about the software enhancements in another blog as the release gets closer). There’s plenty more to do though, with development continuing for at least another month or so – hopefully including lots of feedback from our beta testers! Of course we don’t just rely on external beta testers; lots of testing also goes on-house. This includes testing both the technical and scientific aspects of the new release. Technical testing includes jobs such as making sure the new software installers work on all the Windows, Linux and Mac machines we support. Scientific testing mainly involves CCDC researchers using the new software releases in much the same way our users do, and trying to make sure any new enhancements are intuitive and easy to use. 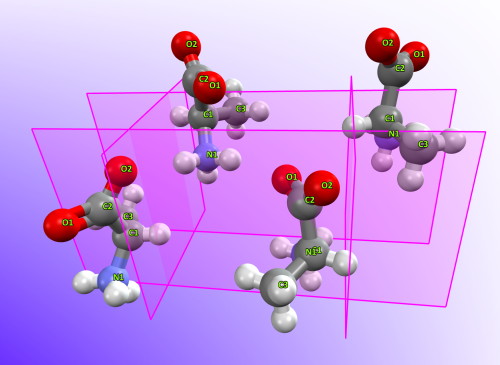 Exported images from Mercury showing some of the latest visualisation enhancements  The images show the structure DL-alanine (DLALNI01) with glide planes shown in pink and the [200] crystal slice shown in the RHS picture.

The database group have also been busy, preparing the CSD data that will accompany the new software. The annual release is used as a chance to do some extra checks on all the structures (over 47,000) that have been added to the CSD over 2012, and make sure any comments from our users have been addressed.

Much of the work for the new CSD System release probably falls upon our marketing, business and finance teams, and this work too is well underway. Orders have been placed for the packaging, newsletters and DVD copying, and schedules are ready to be sent out to our users. Even the invoices have already been created. Once the DVD copies and schedules are returned, the real hard work starts as we all begin to pack and dispatch over 1500 boxes to our users.

Pictures from the packing of the CSDS 2012 release; packing and sending software to over 1500 customers is no small task!
We’ll soon be giving more details of the new features coming up in the latest release, hopefully there will be a few things to make you keen to get hold of the new software when we start to send out copies in November.​