Molecules that have different molecular packing arrangements despite identical chemical composition are said to be polymorphic. The variety of possible forms, each an allomorph (or polymorph), presents opportunities and challenges in various fields – including the drug industry and agriculture and forestry. In this blog, we talk to United States Department of Agriculture (USDA) Research Scientist Emeritus1 and the Editor-in-Chief of Cellulose, Dr Alfred D. French about his work with cellulose, which has multiple polymorphs (allomorphs).

How long have researchers been solving cellulose structures?

French says that cellulose polymorphs have been known for about 100 years.

“However, since 1999, relatively highly crystalline samples have been created and subjected to both synchrotron X-ray diffraction and neutron diffraction studies – enabling some confidence in the results,” he said. “The impact of these structure determinations by Nishiyama2 and colleagues is high because they can then be used in modelling software, such as molecular dynamics, to predict properties such as hydrolysis by enzymes. Also, they have been used as input to various spectroscopy programs to compare the calculated spectra with the observed ones. The similarities and differences are useful for interpreting the differences between the highly crystalline examples and the ones normally encountered in the textile, paper, membrane and nanocellulose enterprises,” French said. 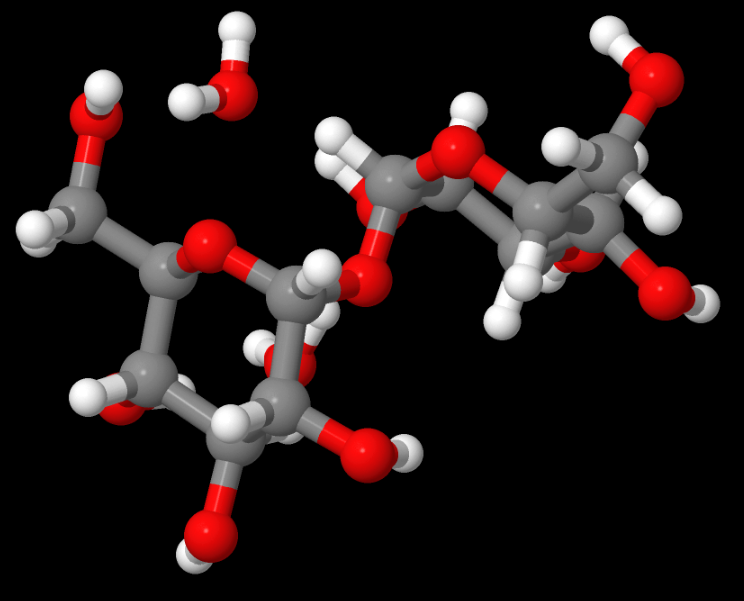 Above: TREHAL12 -- This structure was an electron or charge density study for an important carbohydrate with Ed Stevens, a pioneer in that field, French says. French served as the molecular modeller. Read the paper, Experimental and theoretical electron density distribution of α,α-trehalose dihydrate. (Carbohydrate Research, 345 (10) 2, 1469-1481 2010).

How and why are different cellulose allomorphs produced?

One way to produce different cellulose allomorphs is through “mercerization,” which is a process in which textiles (often cotton) are treated with a caustic solution to improve fibre properties. 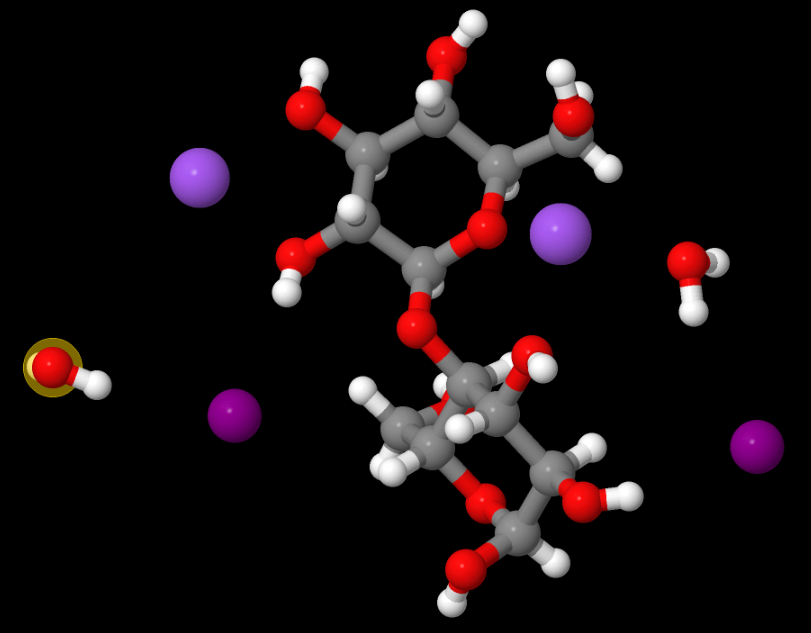 Above: MOVGIN -- French says this may be one of the most useful structures to which he contributed (as a molecular modeller) because it helps explain the structures of soda cellulose. It was also solved by Ed Stevens. Read the paper, The crystal structure of the α-cellobiose·2 NaI·2 H2O complex in the context of related structures and conformational analysis. (Carbohydrate Research, 337 (9) 851-861, April 2002).

What unique challenges do researchers face in solving cellulose polymorphs?

Cellulose has both crystalline and amorphous regions and solving both types of structures is key to understanding its physical and biochemical properties. The allomorphic transformations may not be complete and determining the composition is difficult because the crystals are so small, giving broad diffraction peaks.

French says he and his colleagues routinely use x-ray crystallography (XRD) to confirm sample origin and history.

“I have been trying to move the community towards the Rietveld method because we have .cif files from the Nishiyama et al. structures and Rietveld is well-suited to answer the questions of allomorph, unit cell dimension, crystallite size (because of the polymeric nature, crystal size anisotropy is important), amorphous component and preferred orientation,” French said. “The other methods – such as a peak height method and a ‘peak deconvolution method’ – have fundamental limitations. Rietveld's problem is that there are many variables, and cellulose powder patterns do not have much information. A data vs. refinable parameters issue is inevitable and the rules have not been sorted out yet, as far as I know.”

His team uses CCDC’s Mercury program to calculate powder patterns, which he jokes is “a gateway drug” to Rietveld analysis.

“The ability to calculate specific patterns with different full-width-at-half-maximum (FWHM) values led to the conclusion that much of what had been attributed to amorphous material in cellulose diffraction is in fact overlap of the broad peaks from the small crystals of cellulose 2 to 15 nm,” French said. That depends on the validity of Mercury’s assumed pseudo-Voigt peak shape. “Another discovery was that the powder pattern from the cellulose II allomorph, when plotted with an FWHM of 9 degrees, gives a pattern that resembles the pattern from ball-milled amorphous cellulose.”

Mercury also plays well with other tools his team uses.

“The Rietveld program, MAUD, that I use uses a different algorithm to equate FWHM with crystallite size instead of the well-known Scherrer equation in Mercury,” French said. “In a simple-minded way, I can calculate a series of Mercury patterns with a given FWHM and then solve them with MAUD for crystallite size.”

In 2014, French authored the highly cited paper, Idealized powder diffraction patterns for cellulose Polymorphs (Cellulose 21, 2014), which supports the adoption of a single convention by both the fibre diffraction and powder diffraction communities when describing the unit cells of the crystal structures in cellulose. In the paper, French says that x-ray diffraction studies are one of the most common analyses conducted on cellulose and are used to determine a sample’s polymorphic form or degree of crystallinity. However, connecting those efforts and the crystal structures proposed from synchrotron X radiation and neutron diffraction can be confusing. This is partly due to different conventions for describing unit cells. The paper offers calculated diffraction patterns from different cellulose allomorphs along with recommended indexing, which he generated using Mercury.

“As the Editor-in-Chief of the journal Cellulose, I have insisted on these conventions whenever I find them disobeyed,” French said. “The Idealized paper has been helpful in that regard. Although different conventions are not a big issue for experienced crystallographers, they are a big problem for those trying to find their way. Nobody has argued for any other convention, and I have support from those who have done the high-level structures. The problem comes when referencing the older work that used another convention. Should the modern authors alter the equations to conform and ‘misquote’ the older authors? As stated in the 2014 paper, the conventions that I have asked authors to standardize on have been proposed since about 1970 for polymers in general. I don't get a chance to read the literature that much but do feel that progress is being made. At a meeting a few years ago, I pointed out to the speaker that his use of an older convention would not be accepted in Cellulose, and there was applause from another part of the room.”

This year, French coauthored the paper Comparison of cellooligosaccharide conformations in complexes with proteins with energy maps for cellobiose (Carbohydr. Polym. 264, 2021). In it, the researchers worked to better characterize the amorphous structure of cellulose, which isn’t as well characterized even though it’s the location of much solid-state molecular behaviour. For example, industry hopes to better understand amorphous cellulose as it may be more accessible to added chemicals and its greater conformational variability can lead to reactive subunits that could have useful applications.

It’s common to characterize oligo- and polysaccharide shapes in terms of the torsion angles, ϕ and ψ, about the bonds of their glycosidic linkages, analogous to proteins – both developed by Ramachandran –  and that’s what this study attempted. A crystal structure study is often used to find ϕ and ψ, but that requires a crystal. Amorphous material needs a different approach. The authors used a combination of experimental and computational approaches. For example, they used data from the Cambridge Structural Database (CSD) on small-molecule crystals with linkages similar to cellulose and augmented it with data from the Protein Data Bank (PDB).

“An important finding is that the structures in protein complexes are somewhat different than would be predicted by our quantum mechanics studies and from structures in the CSD,” French said. “A more in-depth study is needed to know the implications. The initial idea was that the PDB structures have a very wide range of linkage conformations and some of them are probably in error. This study was intended to provide some guidance to that type of work.”

Dr French’s structures in the CSD

We are honoured to have 11 structures from Dr French in the CSD. 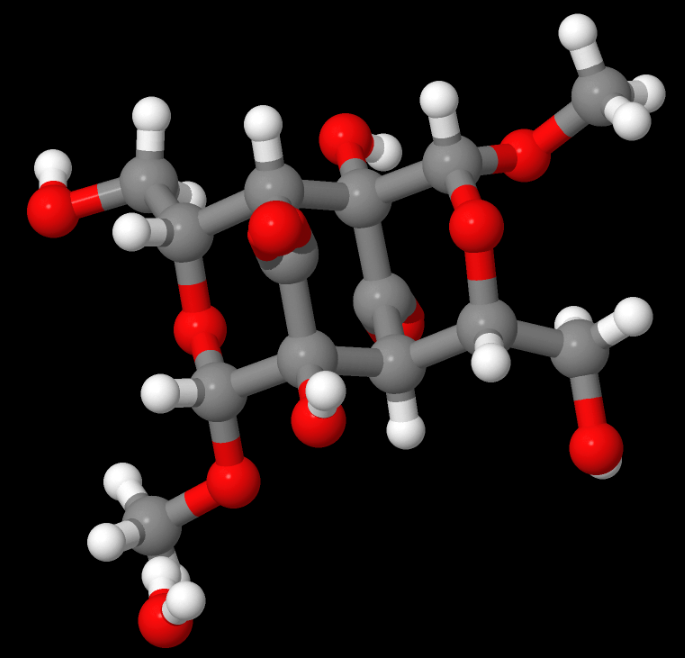 Above: NENVEJ -- The structure has three six-membered rings that are formed by two eight-membered rings that constitute a 10-membered ring. There is a very short C...O contact. It was solved by Kurt Mereiter, a prolific contributor to the CSD, French said. French served as the molecular modeller. Read the paper, 2,4′:2′,4 Dianhydride of 3-keto-glucoside, a precursor to chromophores of aged, yellow cellulose, and its weak interactions. (Cellulose 24,1227–1234, 2017)

1Descriptive, not official, title. Dr French officially retired from the agency in 2014.