Note: this post was originally published 6th December 2021, and has been updated to reflect new developments in these features.

Here we look at how you can use SMARTS and SMILES in Mercury and the CSD Python API to perform substructure searches, and generate 3D molecules from strings to support your cheminformatics work. Using SMARTS and SMILES allows you to automate large numbers of queries, or perform complex searches that may not be possible by other methods.

What are SMILES in chemistry?

SMILES stands for Simplified Molecular Input Line Entry Specification. They are a way to represent a molecule in a compact way, readable by both machines and humans. They are a standard language used in chemistry and cheminformatics to represent molecular structures.

Daylight have definitions, examples, and tutorials on SMILES here.

What are SMARTS in chemistry?

SMARTS stands for SMiles ARbitrary Target Specification. They are like SMILES, but can be used to express substructures and patterns. They are the standard query language in cheminformatics toolkits such as RDKit.

For example C1CCC[*]C1 would represent any saturated, 6-membered ring containing 5 carbons and an “any” atom, as sketched below.

A 6-membered, saturated ring containing 5 carbons and an “any” atom, described by the SMARTS string; C1CCC[*]C1

Daylight have a range of definitions, examples and tutorials to learn more about SMARTS.

How to use SMARTS and SMILES in Mercury

There are several ways that SMARTS and SMILES can be used in the desktop software Mercury: 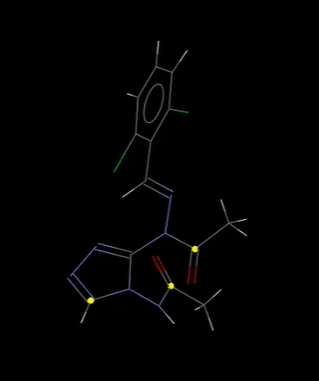 How to use SMARTS and SMILES in the CSD Python API

In this release we have improved the handling of logic operators when working with SMARTS in Mercury - it’s now possible to use high and low priority AND statements, plus mix these with OR statements.

The logical operators used in SMARTS are;

Using recursive SMARTS with the CSD

Recursive SMARTS allow expression of atoms that are themselves conditioned on substructures. This means that one query can encapsulate ambiguous queries, for example to return results where a group is at one position OR another.

The $ symbol is used to write recursive SMARTS. This can be used in Mercury or in the CSD Python API. 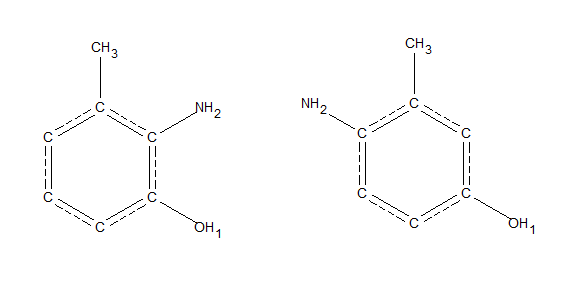 The two ambiguous structures that could be searched for with one recursive smarts query: C[$(c(c[NH2])cc(OH),$(cc([NH2])c(O))]

Recursive SMARTS can also be used to perform “not” queries, for example, to search for two aromatic rings singly bound to any acyclic atom except for a sulphur or oxygen, the query would read; c1ccccc1!@[!$([S,O])]!@c2ccccc2

Note that recursive SMARTS only ever match to one atom. 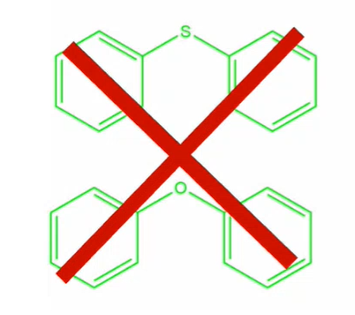 Search for two aromatic rings, singly bound to any acyclic atom except for a sulphur or oxygen - this search would be possible with recursive SMARTS string c1ccccc1!@[!£([S,O])]!@c2ccccc2

Dot disconnect SMARTS allow for intramolecular and intermolecular pattern matching. They can be used in the desktop CSD program Mercury and the CSD Python API.

For example, ([Br].[NH3]) would return molecules containing both a bromine and a primary amine, which do not have to be connected.

However ([Br]).([NH3]) would return pairs of molecules containing a bromine and a primary amine, i.e. they must not be in the same molecule.

[Br].[NH3] returns hits that match either of the above cases.

Find out more about the CSD, the Cambridge Structural Database, here.

See the latest updates to CSD software and data here.