Jack Dunitz is a well-known chemist and chemical crystallographer with an extraordinary research history in structural chemistry. A recurring theme in Jack’s research has been use of crystal structure analysis to study chemical problems such as molecular conformation, reaction paths, intermolecular interactions, molecular motion in solids and solid-state reactions. It is not surprising therefore, given his research history, that Jack has long had a close connection with both the Cambridge Structural Database (CSD) and the Cambridge Crystallographic Data Centre (CCDC). Not only has Jack been a staunch supporter and frequent user of the CSD, he was also one of the inaugural Governors of the CCDC when the centre was first established as an independent, not-for-profit organisation and served on the board from 1987-1999.

At the 50th anniversary event for the CSD, Jack made essentially the last comment of the whole meeting and, whilst praising the CSD in general, made a heartfelt plea that we start to include thermal ellipsoids in the CSD alongside the 3D atomic coordinates, chemistry and bibliographic information for each entry.

Jack Dunitz at the CSD50 event in 2015 – “50 years of the Cambridge Structural Database: Origins, Influences & Directions” Thermal ellipsoids, more formally termed anisotropic displacement parameters (ADPs), capture the average deviation of atoms from their refined positions in a crystal structure. This can provide a lot of additional information about the structure, not just relating to temperature (thermal motion), but also static disorder and issues with the experiment, data or model. When critically evaluating a structure, a quick glance at the ADPs can convey a huge amount of information about motion or the quality of the structural model. Jack has been encouraging the CCDC to start capturing ADPs alongside atomic coordinates since the 1980s, but up until now the underlying technology of the system has restricted the opportunity to do this. As detailed in a previous blog post on the 2018 CSD Release, and thanks to a lot of hard work on the underlying technology, in this year’s release we have been able to make ADPs available in the CSD for the first time! There are now over 200,000 entries in the CSD with ADP information captured and the number is due to keep rising as we back-populate information from older experimental CIFs. This May, we happened to have Jack visiting the CCDC building for the 2018 CCDC Research Day – an event where all the CCDC-supported PhD students attend and present their latest research to the CCDC, their peers and visiting scientists. To commemorate the inclusion of ADPs this year within the database, Clare Macrae, lead developer on this project, presented Jack Dunitz with a gift of a 3D printed model from a crystal structure displaying the published ADPs. The structure selected, published in 1972, was one of the six structures that Jack used, with Hans-Beat Bürgi, to develop the Bürgi-Dunitz angle describing the geometry of approach of a nucleophile to a trigonal unsaturated centre in a molecule. The model was 3D printed in bronze and produced from the structure of clivorine (CSD refcode CLIVOR10) including ADPs. 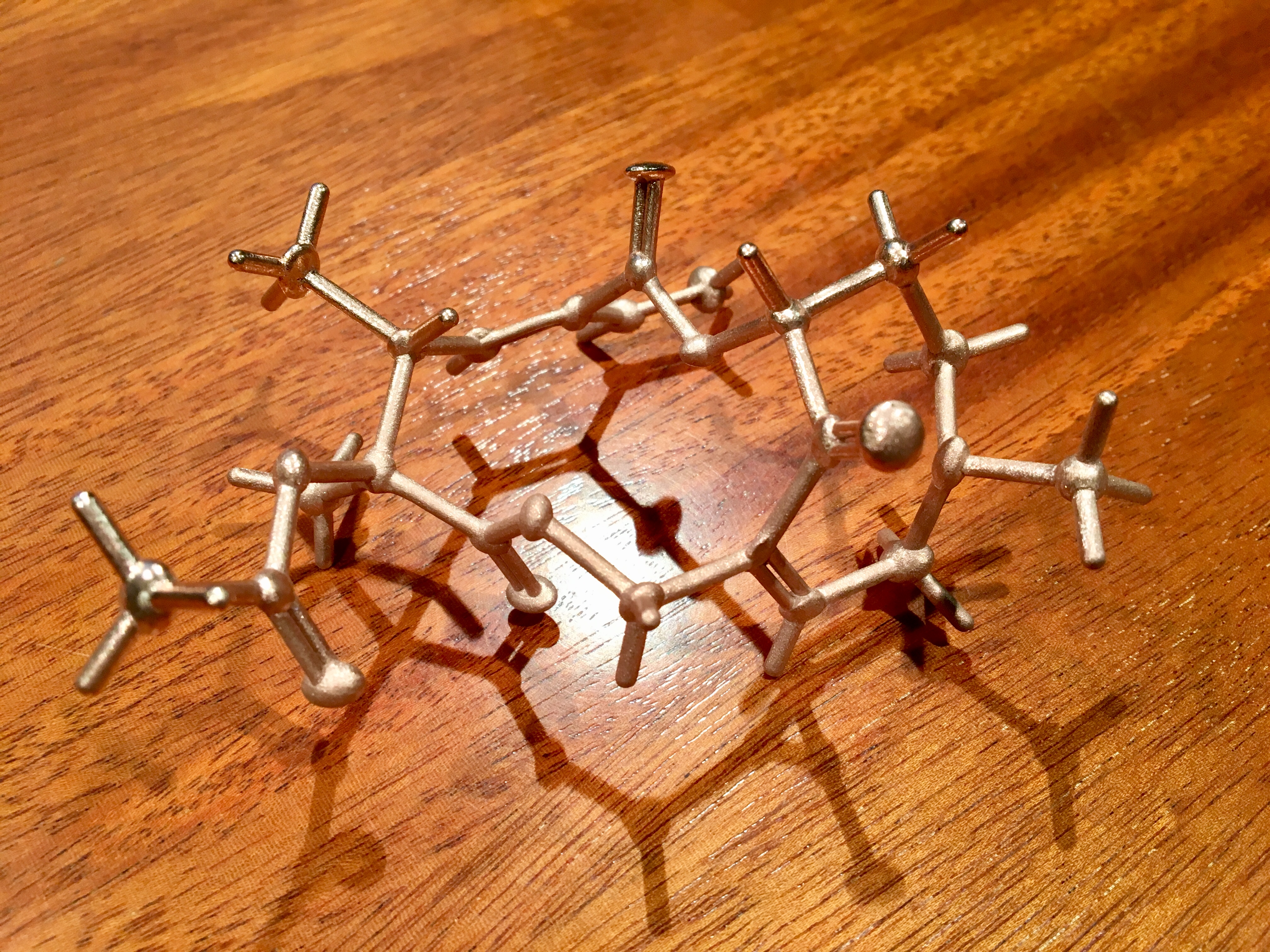 Close-up image of the 3D printed model of clivorine (CSD refcode CLIVOR10) including illustration of the Bürgi-Dunitz angle and anisotropic displacement parameters (ADPs) If you would like to view the entries that are currently in the CSD with ADP data available, you can access the list in ConQuest for browsing (choose View Databases > Lists in CSD…) or use the list to filter a search that you have set up (choose Select Subset > Entries in pre-defined hitlist). Alternatively, you can load the list into Mercury and change the display style to Ellipsoid for visualisation – the ADPs available subset refcode list will be available in a location like “C:Program Files (x86)CCDCCSD_2018CSD_539subsetsADPs_available_subset.gcd”, or similar on your system. 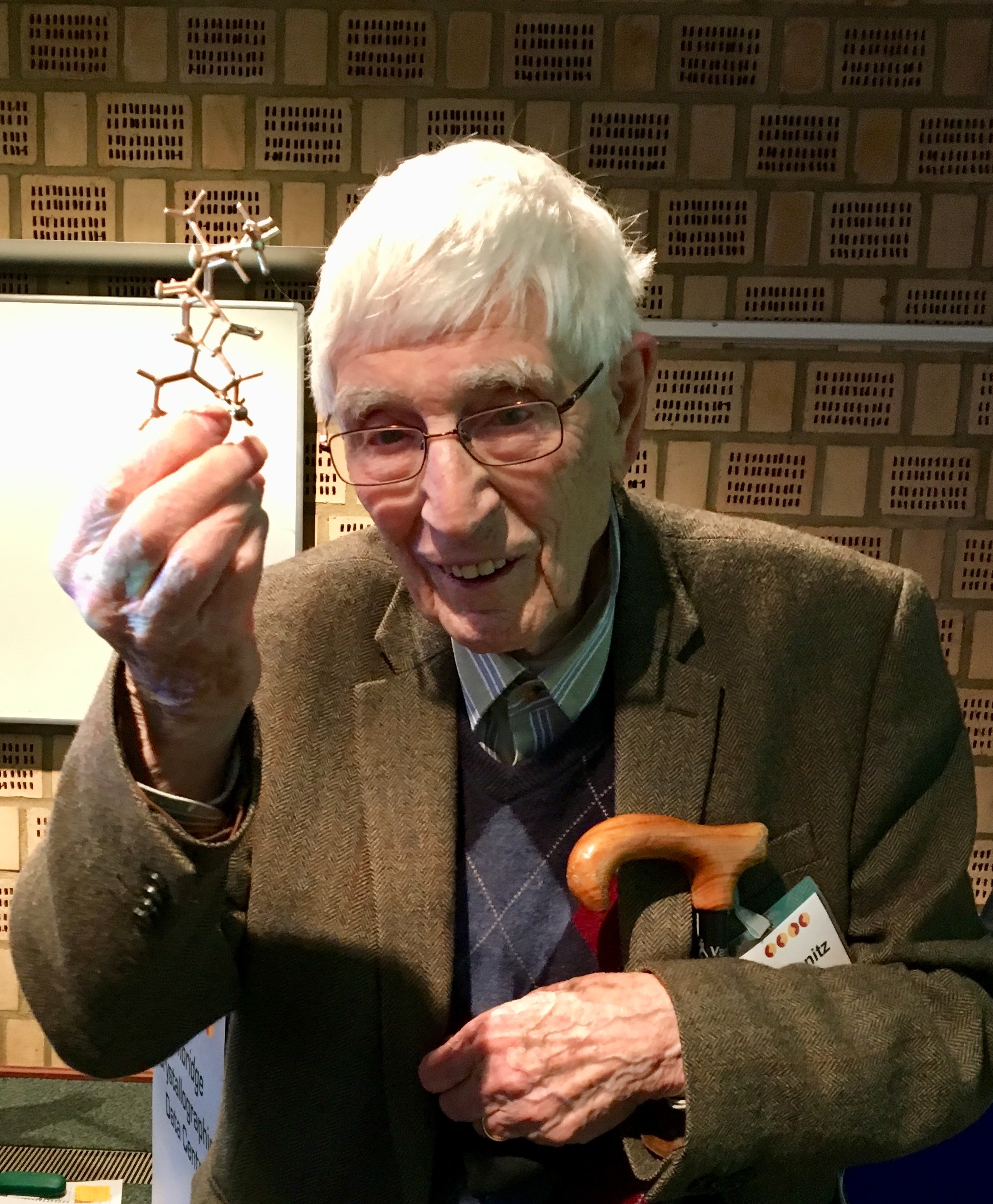 Jack receiving the 3D printed model of clivorine (CSD refcode CLIVOR10) at the 2018 CCDC Research Day We expect to see the number of entries with ADPs available in the CSD data rise significantly in the next major release of the software, so do watch this space! We’re looking forward to seeing how the community makes use of this additional data associated with structures. Please do let us know if you have any feedback about the ADPs available through the CSD now, or additional features you’d like to see in the system associated with ADPs. We’re always happy to get feedback or questions through or our CCDC social media channels (Facebook and Twitter). Pete Wood, Product Manager for the CSD System