Essential resource to scientists around the world reaches historic record

Cambridge, U.K and Piscataway, NJ, USA, 12 December 2014. Today, the Cambridge Crystallographic Data Centre (CCDC) announced that over 750,000entries are now available to the scientific community through the Cambridge Structural Database (CSD). This unique, fully validated database, established in 1965, contains all small-molecule chemical structures ever published and is an essential resource to scientists around the world.
The publishing and sharing of ¾ million structures of organic and metal-organic molecules is a significant landmark for the crystallographic community, achieved within the International Year of Crystallography (IYCr). Information derived from crystal structures is vital to structural chemistry research, in particular to pharmaceutical drug discovery, materials design and drug development and formulation. Almost every field of chemistry routinely uses the knowledge of molecular geometry and molecular interactions derived from crystallographic databases. It is also a highly valued resource for students and teachers who utilise these structures to showcase molecules in 3D to teach core chemistry concepts and inspire the next generation of structural chemists. Colin Groom, Executive Director of the CCDC commented, “The determination of 750,000 crystal structures is a remarkable achievement and a fitting way to end the International Year of Crystallography. Not only does every individual structure have its own story to tell, knowledge from the entire the collection has transformed our understanding in structural chemistry and beyond.” The Manager of the Cambridge Structural Database, Suzanna Ward remarked, “To achieve this milestone, only five years after the 500,000th structure entered the database should fill structural chemists with great pride. It not only emphasises the continued importance of crystallography, but demonstrates what can be achieved when an entire community commits to the effective sharing of data.” The CSD's 750,000th entry is of a co-crystal of vanillic acid and theophylline, determined by Ayesha Jacobs and Francoise M. Amombo Noa. Ayesha Jacobs, from the Cape Peninsula University of Technology in South Africa said, “This is very exciting news indeed. The CSD is invaluable in our research, to have our structure as the 750,000th one submitted to the CSD and for it to be in the International Year of Crystallography is rather special.” The formation of co-crystals such as this demonstrates one branch of the discipline of crystal engineering, which plays an increasingly important role in the pharmaceutical industry as an approach to enhance the physicochemical properties of potential drug molecules. The knowledge of this structure, combined with the collection of all the structures in the CSD will be utilised by scientists worldwide to engineer new drug crystal forms. The particular molecules in this structure are vanillic acid, an oxidised form of vanillin, responsible for vanilla flavour and theophylline, another natural product, found in cocoa beans and closely related to caffeine. Theophylline is a methylxanthine drug used as a therapy for respiratory diseases such as chronic obstructive pulmonary disease and asthma.

Access the 750,000th entry, along with all other structures in the CSD here. 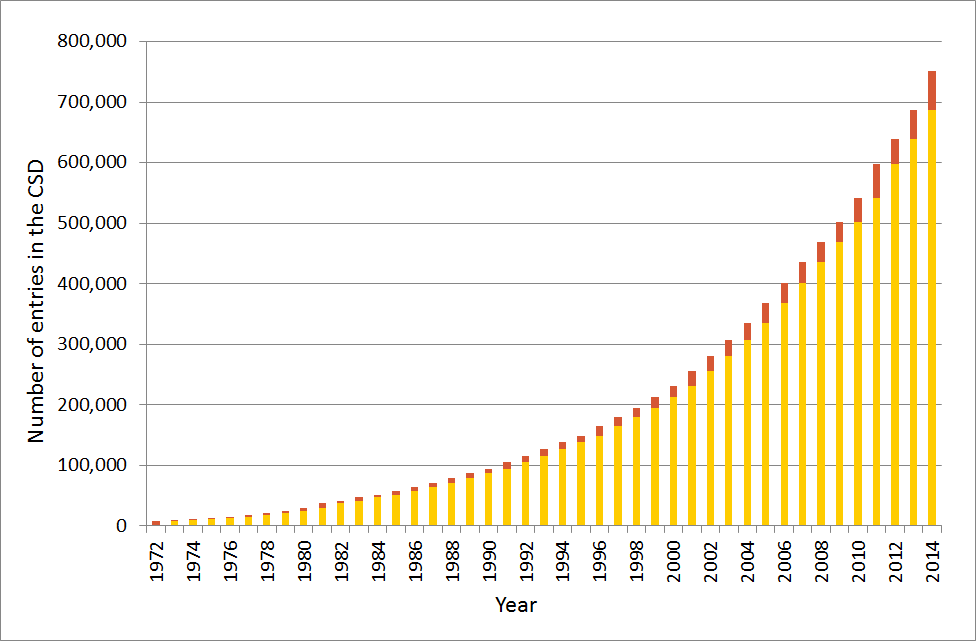 This bar chart depicts the CSD growth since 1972, where the red segment of each bar indicates the newly added structures, and the gold portion of each bar represents the existing structures.
About The Cambridge Crystallographic Data Centre The Cambridge Crystallographic Data Centre (CCDC) was established in 1965. It supports structural chemistry research through its Cambridge Structural Database (CSD), the world’s only comprehensive and fully curated database of small molecule crystal structures, containing over 750,000 entries, and through knowledge-based tools to support receptor modelling, ligand design, docking, lead optimization and formulation studies. Its database and modelling systems are in use at research operations worldwide, including over 1,200 academic institutions and all of the world’s top pharmaceutical companies. The CCDC is a fully independent institution constituted as a non-profit company and a registered charity since 1989. The CCDC is financially independent, supported entirely through contributions received for the Cambridge Structural Database System and industry-leading software such as GOLD and Relibase+. The CCDC has a strong track record in basic research through more than 700 peer-reviewed publications; these papers have attracted more than 18,000 citations in the international scientific literature.
For additional information, please contact: Or visit www.ccdc.cam.ac.uk