Cambridge Crystallographic Data Centre (CCDC), Cambridge, UK —15 March 2022 — The existence of various molecular arrangements that occur in the solid-state is called polymorphism. During early-phase drug discovery, researchers commonly look at hydrogen-bonding networks to identify potential metastable polymorphs. But what if a system doesn't have hydrogen bonding? Or what if the hydrogen-bonding networks are the same in two different solid forms?

Going beyond hydrogen-bonding networks with CSD-Materials 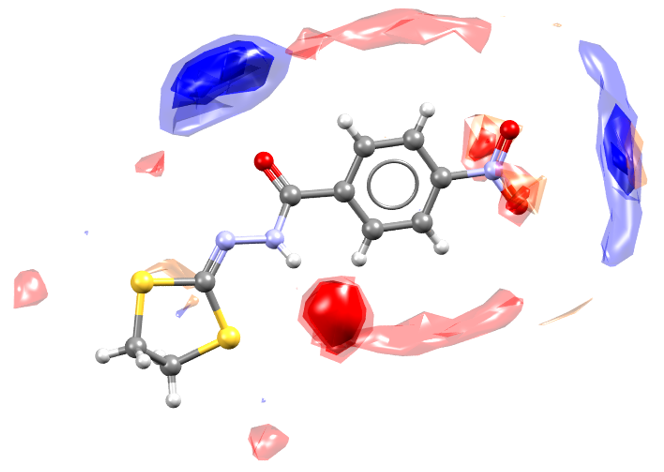 A full interaction map (FIM) for the CSD entry DEDMUX, a potential tuberculostatic agent. The map compares the observed intermolecular interactions with preferred geometries for that type of interaction. The red regions of the map denote areas where there is a high probability of a hydrogen bond acceptor, the blue regions denote hydrogen bond donors, and the brown regions indicate hydrophobic preferences. DOI: 10.5517/ccdc.csd.cc1prpw0.

FIMs provide a molecule’s interaction preferences in the context of the observed crystal structure—generating an intuitive, 3D visualization of the molecule's preferred interactions and the intermolecular packing of the crystal structure. This can help identify potential co-former or solvent interactions for a new API. The component calculates regions around the molecule where chemical probe groups are likely to be found using the empirically derived, expert-curated data in the Cambridge Structural Database (CSD). The CSD is the world’s repository for small-molecule organic and metal-organic crystal structures—containing over 1.1 million structures from X-ray and neutron diffraction analyses.

The Aromatics Analyser enables the quantitative assessment of aromatic ring interactions and is CCDC’s first component based on a neural network. The model scores the strength of an aromatic interaction between two phenyl rings using quantum mechanics and the rings' relative positions, highlighting any likely contribution to the stability of a crystal structure. Sometimes the dominant interactions stabilizing a system are solvent dependent. The Aromatics Analyser can specifically help in these cases, as well as when hydrogen-bonding networks alone cannot distinguish between solid forms.

In a recent paper published in Crystal Growth & Design, researchers at AstraZeneca applied the CSD-Materials suite—specifically the Hydrogen Bond Propensity, FIMs, and Aromatics Analyser components—to de-risk the solid-state forms of a potential asset for immune-mediated diseases. In this work, the authors first analysed the hydrogen-bonding networks of two solid forms with the Hydrogen Bond Propensity tool. Dr Okky Dwichandra Putra is a co-author on the paper and Associate Principal Scientist in Early Product Development and Manufacturing at AstraZeneca. “Typically, we observe that the propensity tool can discriminate among hydrogen bond propensities to indicate possible risks,” Putra says. “However, it is not uncommon to see that hydrogen bond propensities overlap. This is also dependent on the propensity ranges and how much they overlap with each other. And as molecules become more complex there will be more competitive sites for hydrogen bonding.” As a result, he says it’s standard for the team to also run a dispersion-corrected, density-functional theory (DFT) calculation, and for the team to use the Aromatics Analyser and FIMs components of CSD-Materials. These methods were all used to analyse two key forms in the paper. Both the Aromatics Analyser tool and the DFT calculations showed the importance of considering aromatic interactions, especially in what was deemed the most pharmaceutically viable solid form. “We have found that stacking and other dispersion interactions play important roles in stabilizing crystal structures and for crystal growth,” Putra says. “So, it is critical to get the overall interactions described and not only hydrogen bonding.” Read the paper: Putra, O.D. et al. Crys. Growth Des. 2022 22 (1), 535-546. DOI: 10.1021/acs.cgd.1c01124