CCDC > Blog > What is Crystal Structure Prediction? And why is it so difficult?

What is Crystal Structure Prediction? And why is it so difficult?

What is Crystal Structure Prediction (CSP)?

Crystal Structure Prediction (CSP) refers to the ability to identify the correct crystal structure(s) that will form from a given molecule, based on its molecular structure. Most methods use informatics and computational science techniques. The field first gained popularity in the 1980s, following statements from John Maddox on how chemists still struggle to predict crystal formation.

"One of the continuing scandals in the physical sciences is that it remains in general impossible to predict the structure of even the simplest crystalline solids from a knowledge of their chemical composition." Maddox, J. Crystals from first principles. Nature 335, 201 (1988). Maddox – a chemist and physicist by training – served as an editor for Nature for 22 years. 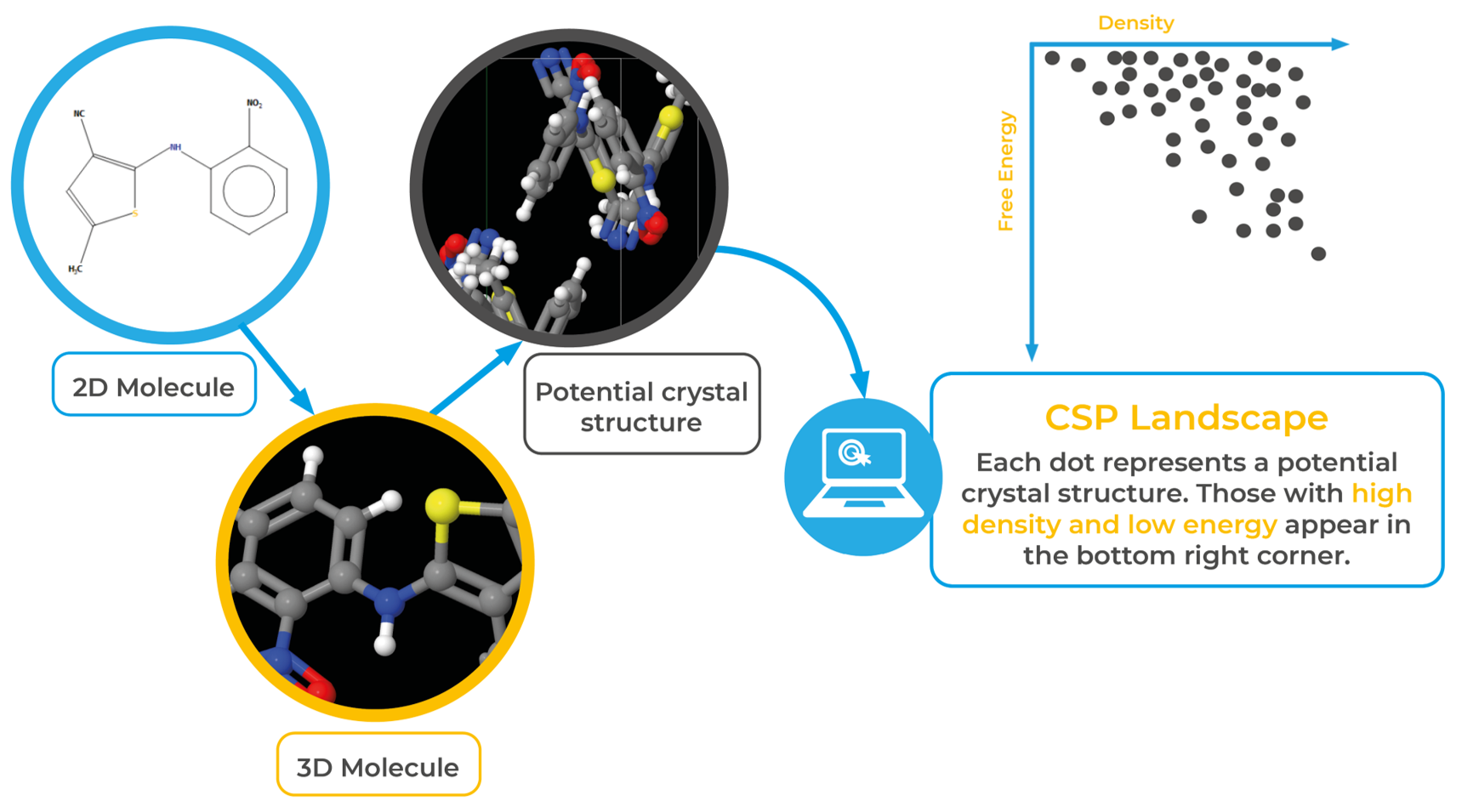 Typically, a CSP analysis starts with a 2D structure of a molecule. From that, CSP researchers build a 3D molecular model, and then use advanced search techniques to generate plausible crystal structures based on free energy and packing density. Along with these 3D models, landscapes are important CSP outputs. A landscape is a scatterplot of potential  conformations that graphs free energy and density. Often the more plausible –  and therefore more likely observed – structures have low energy and high density, which is why a scatterplot can prove so helpful in identifying which potential crystal structures warrant additional experimental analyses.

Why is CSP so hard?

There are a few key reasons CSP remains a challenge today. Polymorphs present a unique challenge to CSP researchers. Consider the seemingly simple molecule 5-methyl-2-[(2-nitrophenyl)amino]thiophene-3-carbonitrile – often just called "ROY" (QAXMEH33). ROY stands for "Red Orange Yellow" because the compound varies in color based on the conformational polymorph present. (The molecule's planarity in a given crystal determines the color. There are currently 13 characterized ROY polymorphs, and researchers continue to find new ones. To move forward, we likely need a deeper understanding of the crystallization process as a whole. As Sally Price discusses in the paper "Control and prediction of the organic solid state: a challenge to theory and experiment," we need to move from just structural prediction to predicting structural creation, which depends on experimental conditions. Read more about it here: Proc. R. Soc. A. 474(2217), 1471-2946 (2018).

What does CSP provide?

A CSP landscape has several applications, including: 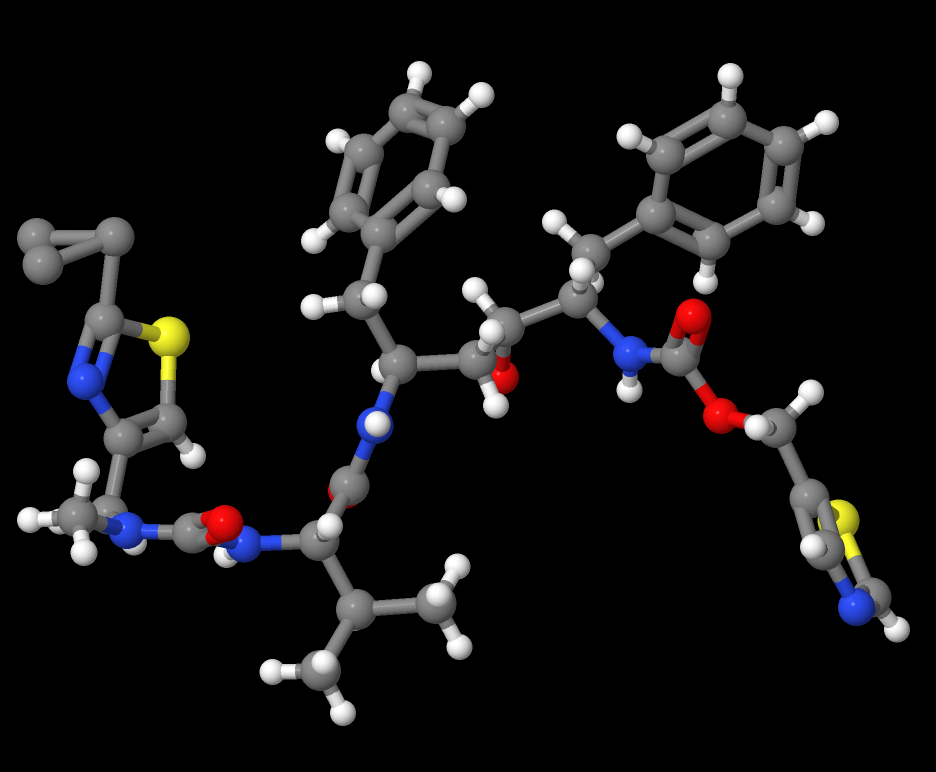 Ritonavir is an HIV antiviral and a famous example of issues caused by unexpected polymorphs. A late-occurring, more thermodynamically stable polymorph appeared during the scale-up process for manufacturing ritonavir. Once the more stable polymorph appeared, it proved difficult to produce the original therapeutic version. It's estimated to have cost $250 million in lost revenues, and it isn't an isolated case. Several additional examples have occurred since, which you can read about here:  Bauer, J., Spanton, S., Henry, R. et al. Ritonavir:  An Extraordinary Example of Conformational Polymorphism. Pharm Res 18, 859–866 (2001) . Further studies have suggested that even existing drugs may face similar challenges. Marcus A. Neumann and Jacco van de Streek used CSP to analyze this, and they found that between 15 and 45 percent of small-molecule therapeutics are distributed using a seemingly metastable form.

"Based on a thorough and critical analysis of the commercial crystal structure prediction studies of 41 pharmaceutical compounds, we conclude that for between 15 and 45% of all small-molecule drugs currently on the market the most stable experimentally observed polymorph is not the thermodynamically most stable crystal structure and that the appearance of the latter is kinetically hindered."  Faraday Discuss., 2018,211, 441-458

CSP can help identify these types of issues before manufacturing process are put in place. Consider the (toy) landscapes below. The team produced CSP solid-form landscapes of a series of molecules and then projected the value of properties important for gas storage onto the CSP landscape. Properties like channel dimensionality of the void space and calculated methane capacity could then be viewed alongside packing and energy. This allowed the team to observe low-density structures that still appeared energetically stable that they could attempt to synthesize in the lab. This is how ESF maps guide material design and development.

Experimentalists successfully synthesized the predicted crystal structures of a triptycene molecule (T2) and were able to observe the low-density structures in the lab. Here's an example: DEBXIT01.

The team also investigated designing molecular crystals with even higher porosity levels with a CSP solid-form landscape of a hypothetical, extended T2 form, called T2E. They successfully predicted an ultra-low-density solid T2E molecule: SEMFAU. SEMFAU is an iso-structural of the T2 form with a predicted density of just 0.303 gcm−3 and hexagonal pore channels with diameters of 2.83 nm. The team successfully synthesized it in the lab – further demonstrating how exploration of the solid form landscape of organic molecular crystals via CSP combined with physicochemical projections (ESF map) can inform functional materials design.

Where is CSP headed?

Ideally, in the next 30 years, we'll be able to take a very elaborate molecule and then quickly predict all its solid forms – including salts, solvates and useful conformers – without false positives on a small computational resource. We will then derive calculated information about the predicted structures, such as how to reliably make each form in the lab. We've still quite a way to go.

How is the CCDC advancing CSP?

CCDC is dedicated to advancing structural science, and we sit in a unique position as a charity, as a place of active research and as producers of leading chemical information software. We can bring together academic intuitions, pharma companies, other software providers and chemical data standards organizations with the common goal of advancing CSP.

For the past 30 years we've held a blind test aimed at CSP developers in industry and academia with the goal of testing new CSP methods and demonstrating to the broader scientific community the usefulness of CSP. Each year, we work with participants all over the world.

The event always generates lots of discussion, learnings and method improvements while giving the participants the opportunity to test and validate their techniques against real data. There are usually participants from pharma and academia that use a variety of different approaches. In the last blind test, there were five systems of differing complexity. We received 25 submissions from 52 academic groups worldwide.  Each compound was predicted by at least one of the groups, and the successful approaches highlighted the importance of re-ranking using density functional theory (DFT).

The current blind test started in October 2020. The molecules this time display greater complexity than years past, and we'll be releasing more experimental data for some of the systems over the course of the year to simulate how experimentalists learn more about their systems as time passes. We'll ask participants to account for the new information in their predictions.

Visit our website to learn more about the CCDC's current CSP Blind Test.

Learn more about how to use CSD-Theory to manage CSP data here.

To watch my CSP presentation, visit the Community Initiatives section of our website.