Julia Gasol, PhD student, University of Strathclyde, shares her experiences of her two week placement at the CCDC working on a Python script to analyse and understand experimental data towards for her project 'From crystal to tablet – linking structure to function through compression studies.'

This provides an insight into CCDC sponsored PhD programmes and the real world science that makes a difference that gets investigated.

Hello! My name is Julia and I’m a final year, CCDC-sponsored PhD student within the CMAC Future Manufacturing Research Hub at the University of Strathclyde. My PhD project, ‘From crystal to tablet – linking structure to function through compression studies’, investigates the effect of pressure on the crystal structures of pharmaceuticals in order to better understand tabletting processes during drug manufacturing. It is supervised by Dr Iain Oswald (Strathclyde), Dr Daniel Markl (Strathclyde) and Dr Andy Maloney (CCDC). I joined the Particle Science team at the CCDC headquarters for a two-week, in-person placement to work on a Python script that could help me analyse and better understand my experimental data.

Using Python to Visualize Molecular Movement as a Function of Pressure

The Python script developed reads a high-pressure crystallographic dataset and selects a molecule in the unit cell of the given system. The molecule’s spatial position within the unit cell is read for each .cif file, translated to fractional coordinates and plotted in a cubic 3D space featuring the planes of the slip planes calculated from the ambient-pressure structure. The script was written using the CSD Python API and the slip planes are calculated for a certain minimum slab separation using the CSD-Particle tool. From the generated 3D display it was possible to visualize molecular movement as a function of pressure and assess whether the movement direction is approximately parallel to a calculated slip plane i.e., whether the molecular displacement happens along a plausible slip plane. The presence of an active slip plane system in the crystallographic structure can provide greater plasticity and can enhance the tabletability of a pharmaceutical material (as shown, for example, in the work of Prof. C.C. Sun et al.). This script enabled me to rapidly examine whether molecular movement upon compression is aligned along the predicted slippage in the system, which I couldn’t do before. When combined with the remaining features in the CSD-Particle tool and the crystal structure visualization of the .cif files in Mercury, the script also allowed me to further investigate what properties can be attributed to calculated slip planes being active or inactive. I had been to Cambridge briefly in the past, so I was excited to explore the city in depth, as well as getting to know what working at the CCDC was like. As I had started my PhD during the Covid pandemic, I had only been able to attend virtual Science Days and mostly interacted with scientists at the CCDC online. On my first day, I was greeted by Andy, Alex and Pietro (CCDC’s Particle Science team). They extended a warm welcome and quickly helped me settle in and make the most of my time during placement with their friendliness and helpfulness. Andy also showed me around the beautifully-designed headquarters. I was surprised to learn that the building had been designed by architect Erik Christian Sørensen, winning The Sunday Times Building of the Year Award in 1993! As a fan of architecture, getting to work on my PhD whilst being surrounded by such a retro design was a pleasure. In addition to working on my Python script, I got to take part in a number of activities and socials over the course of the placement. It was lovely to meet and socialise with staff members outside the CSD-Particle Science team and got a holistic view of the work that is carried out across the Centre.

Studies on the Effect of Pressures on Antibiotics

I was given the opportunity to give a presentation about my PhD work at Journal Club, a weekly meeting for scientists at CCDC to share interesting and exciting articles and research highlights. The turnout was very supportive and lots of interesting questions followed the presentation. The work I presented included studies on the effect of hydrostatic and non-hydrostatic pressures on ofloxacin and levofloxacin (both of which are broad-spectrum antibiotics), as well as highlights on the exploration of mechanical properties of pharmaceutical materials using the sapphire capillary pressure cell on beamline I19 at Diamond Light Source, the spatially-resolved quantification of polymorphic transformations in the tabletting process, and the search of sensitive pressure markers for the 0 to 1 GPa pressure range (1 GPa = 1000 MPa = 10000 bar).

Other events I attended included a Cambridge University Ghost Tour (which turned out to be more cheery than spooky!), a few trips to the pub (where I was introduced to the historic RAF pub The Eagle) and ‘The Digital Future of Process Chemistry & Technology’ symposium, which was organised by the RSC Process Chemistry and Technology Group. This last event took place at the RSC’s impressive Burlington House in London, which consisted of a series of thought-provoking talks on digitalisation in the area of process chemistry and technology. This included Andy’s presentation on ‘Late stage ideas from early development: How structural informatics approaches can transform pharmaceutical processes’. 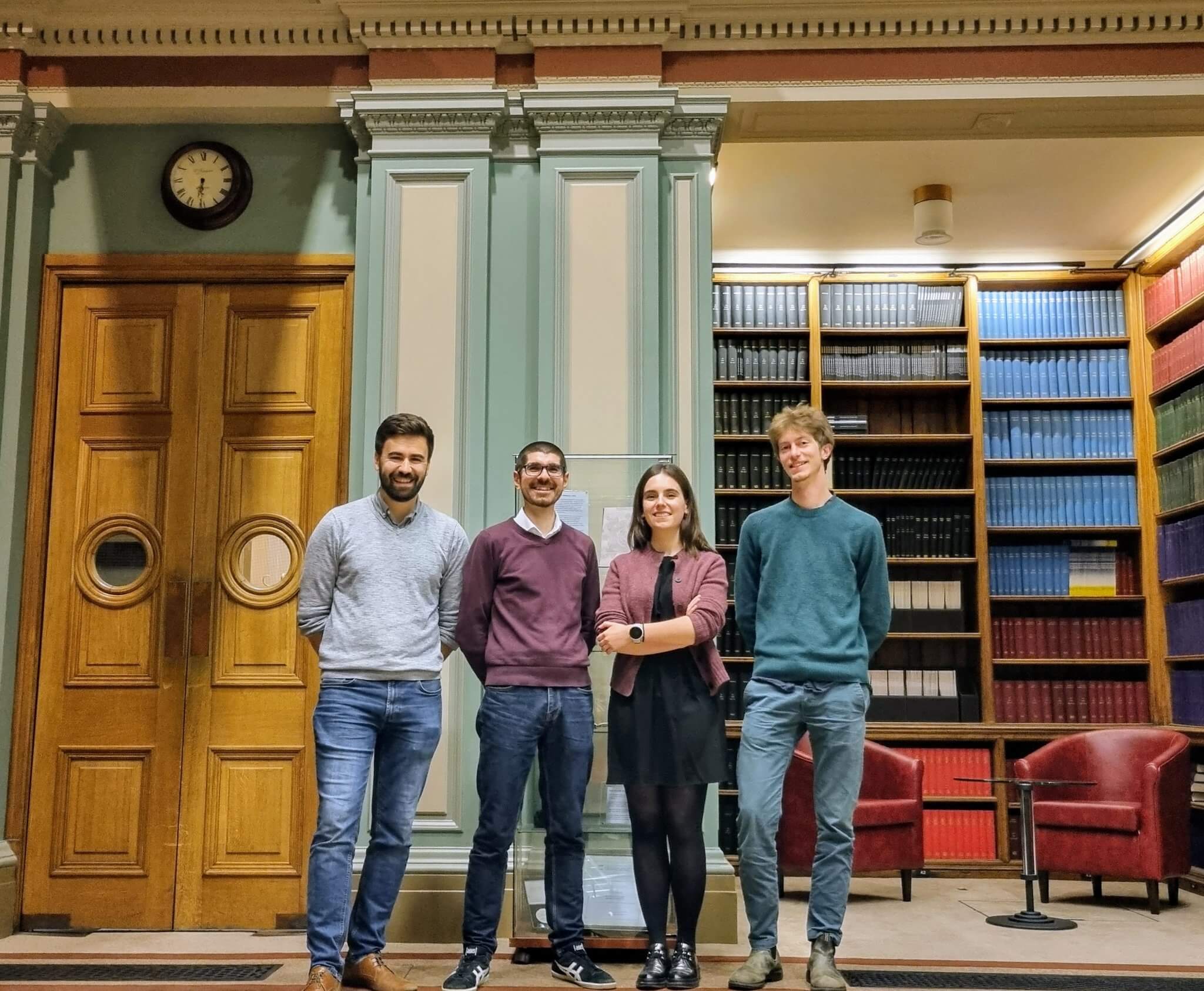 Myself and the CSD-Particle team at the RSC's 'The Digital Future of Process Chemistry & Technology Symposium'.

Overall, my placement at the CCDC was an incredibly positive and rewarding experience. I am incredibly grateful to the CCDC, especially Andy and the Particle Science team, for providing me with this opportunity, as well as their valuable and continued guidance and support during the placement and my PhD journey.