Crystallography in East and West Africa

I have been very fortunate this autumn to visit two markedly different African countries, Kenya and Senegal, on behalf of the CCDC. My first visit was to Nairobi, where Dr Lewis Whitehead of Novartis and I presented a week-long Kongamano: a series of lectures and workshops on crystallographic databases, featuring the Cambridge Structural Database (CSD), and in-silico visualization and modelling applications in drug discovery.

The course was repeated at two different Nairobi universities so we were able to reach nearly 90 Kenyan, Nigerian, Eritrean, Ethiopian, Ugandan and Congolese participants. For the first Kongamano, we headed to Kenyatta University (KU), just within the city limits on the north side of town and reached via the Thika road, a superhighway connecting Nairobi and Thika, used daily by more than 200,000 commuters.  The first two full days of workshop flew by, with participants keen to hear about how to use the CSD-System in their research and, for the lecturers among them, how to use the tools to enhance their chemistry course with 3D visualization for the benefit of their students. 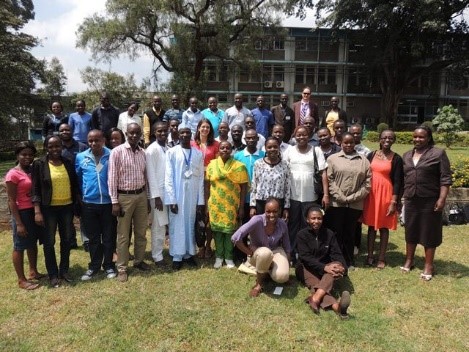 Participants in the second half of the Kongamano “An Introduction to Computational Chemistry and In-Silico Visualization” held at the University of Nairobi, Kenya

On the final day of the KU workshop, students rehearsing for a traditional dance performance invited Lewis to join in, but unfortunately our packed schedule meant that we had to leave right after lunch to continue the workshop that same afternoon at the Chiromo Campus of the University of Nairobi (UoN). Chiromo is located at the heart of the city centre but remains an oasis of calm, with buildings and food outlets dotted throughout the campus among beautiful trees and greenery. It is also where the Mitishamba database of Kenyan natural products was established for the benefit of all in Kenya, East Africa and beyond. The two and a half days at UoN were particularly productive and well received by the participants, including the only undergraduate – and, at 20, the youngest – student on the course. Friday night arrived much too early for me and it was soon time to go back to the UK. Asante sana (thank you very much) to all who made me feel so welcome in Kenya, I will be back one day!

After my experiences in Kenya, I headed to Ziguinchor, Senegal, having been invited to present and give a workshop on the CSD at the first Senegalese crystallography school and travelling laboratory. There were over 50 participants from francophone Africa: most from Senegal, but also some from Madagascar, Cameroon, Ivory Coast, Benin, Burkina-Faso and Mauritania. It was to be a very productive week for participants as most had brought with them at least one sample to be analysed, either on the powder or single crystal diffractometers which had been lent for the duration of the workshop by the Bruker company. So they left with their spectra and their structures solved. The time-constrained aspect of the course was compounded by the eheat and humidity, which made the average temperature of 35 degrees feel closer to 43 degrees. Thankfully Senegal is not short of delicious fruits which can be turned into thirst quenching juices.

The school was superbly organized at the university in the town of Ziguinchor, the main city of the Casamance region, about 300 km south of Dakar across the Gambia but easily reached with an internal flight. Ziguinchor is located right on the Casamance river which slowly meanders its way to the Atlantic Ocean, and every morning fishermen were seen expertly guiding their pirogues and bringing back an array of river fishes, some of which certainly ended up on our plates during the week!

Participants in the CSD System training session during the crystallography school and travelling laboratory held at the University of Ziguinchor, Senegal

We were fortunate that, after an initial five days of hard work getting our heads immersed in crystallography, there was a planned excursion which allowed us to see more of the Casamance region. The conference gala dinner in Cap Skirring marked the end of this very successful first Senegalese crystallography school. We now look towards to Dschang in Cameroon for the first pan-African crystallography conference in October 2016, which will no doubt further help shape the advancement of crystallography in Africa and contribute to recognition of the ways it and more general science can benefit the entire continent. A final Jërëjëf to everyone I was fortunate to meet through this school and more specifically to the organisers who clearly showed why Senegal is known for its unforgettable teranga (hospitality in Wolof).