​We’re delighted to launch a major update to CSD-System which will revolutionise both the communication of structural science as well as the way that innovative research and analysis are performed using CSD data.

The CSD-System update (Mercury 3.6) contains an intuitive interface to produce very high-resolution, high impact graphics at the click of a button. The graphics rendering is performed behind the scenes using POV-Ray (a very effective, and free to use, ray-tracing rendering program), and the interface is very straightforward so you can preview and generate images directly from Mercury. Using the same intuitive interface, movie frames of a rotating structure can also be captured quickly and easily using Mercury. These movies are very effective for illustrating 3D structures in presentations and as supplementary material for a publication.

Physical models can communicate 3D structure even more effectively for outreach, education and research, but methods to produce chemically-relevant models have historically been expensive and/or inaccurate. Today, 3D printing technology is taking the world by storm and it is becoming more accessible to structural chemists either via local 3D printing facilities at the workplace or via web-based 3D printing services. You can now produce an experimentally-accurate 3D printable model file of any CSD structural representation directly from Mercury, whether it is a molecule, packing pattern or extended framework. The interface can even handle intermolecular contacts and automatic generation of a base with supporting columns for your 3D printable model file!

We also receive requests from CSD-System users who want to share data between programs or need to produce customized analyses and applications using CSD data. The new CSD Python API, provides programmatic access to the full scope of CSD-System functionality, allowing users to easily connect together any of the options available through the CSD-System interfaces, as well as providing easy connections to other 3rd party scientific Python libraries.  You can construct and combine detailed analyses so they are highly tailored to your own area of research. The Python programming language is very readable so it is quite easy for first-time users and the CSD Python API contains a helpful user manual with a wide range of example scripts. We have also created a dedicated user forum where you can discuss ideas for scripts, share workflows, suggest extensions to the CSD Python API and get help on usage – see http://www.ccdc.cam.ac.uk/forum/csd_python_api. 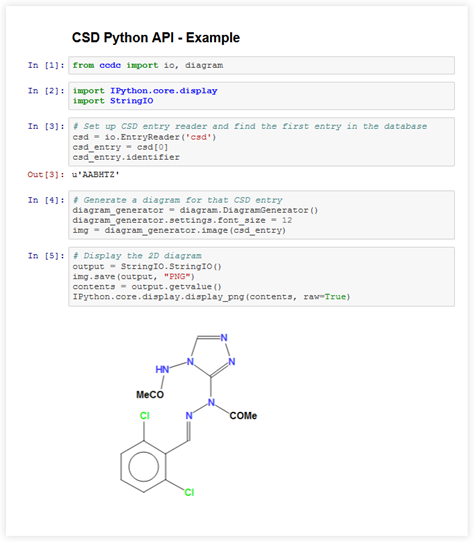 This major update to the CSD-System is available for download now from the CCDC website including the installers for the new CSD Python API. The new visualisation capabilities in Mercury are also available as an update to the standalone version of Mercury for all users (including CSD-Community).

The significant enhancement in Mercury’s scientific communication features alongside the powerful innovation platform provided by the CSD Python API represent a significant advance in the capabilities of CSD-System. I hope you have as much fun trying them out as we had designing and developing them!