This August, the 23rd IUCr Congress and General Assembly was held in Montréal, Canada. The fourth such event had taken place in Montréal back in 1957, so this was something of a revisit, bestowing the city with the honour of being the first to host the Congress twice. My attendance at the event along with Colin Groom, Pete Wood, Suzanna Ward and Paul Davie was also something of a revisit for me, as my former employers CCG, are based there, and so I had been a frequent visitor during my time working with them, and know the city well.

The IUCr Congress and General Assembly lasts for eight days – the longest conference of any with which I am familiar. All the events of the Congress were held within the Palais des Congrés de Montréal, including the Opening and Closing Ceremonies and the Conference Banquet. The Palais is an interesting building; the bulk of which is of 1980s construction, with a more recent extension providing some shops and a large, airy foyer with a multi-coloured glass wall. At the Opening Ceremony we were entertained by two local circus performers and a local jazz band played at the Conference Banquet. Beyond the Palais des Congrés, Montréal is a vibrant, characterful city - as anyone who ventured away from the conference events will no doubt attest – and it was made doubly so during this week as many of the world’s top women tennis players were staying at the same hotel as us, next to the Palais des Congress, during the Rogers Cup tournament! 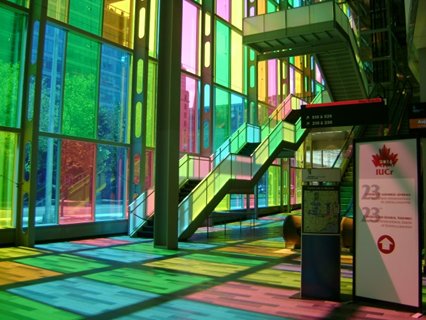 Commercial exhibition hours were unusual, not opening until lunchtime but continuing through the co-located poster sessions, well into the evenings; nevertheless, the CCDC’s double-sized stand provided a focus for our interactions with so many of our friends and colleagues. This was perhaps the most rewarding aspect of the Congress. We were so busy throughout the whole meeting!

Two other major events organised by the CCDC took place at the Congress, and both were extremely well attended and supported, and generated very positive feedback. Suzanna Ward gave a lunchtime seminar expounding on some of the extremes in and presenting some of the statistics on the more than 700,000 entries currently in the CSD. An audience of around 140 enjoyed both this, and the catering provided. Pete Wood’s workshop on the Solid Form tools within the CSD System was also very popular, with over 100 attendees following several examples of their use to solve real problems in materials development. Elsewhere at the conference, CCDC’s Executive Director, Colin Groom, gave a very thought-provoking and entertaining presentation on how to extract meaning from crystallographic data.

The CCDC sponsored three poster prizes consisting of a $500 financial award and a trophy, which were announced at the Closing Ceremony and awarded to deserving young recipients from among the many hundreds of posters on display during the Congress. Congratulations are due to Chiaki Tsuboi (University of Kyoto, Japan), Doris Braun (University of Innsbruck, Austria) and Filipe Almeida Paz (University of Aveiro, Portugal). The picture shows our own Dr Pete Wood with two of the winners, Filipe not having been able to be present at the Closing Ceremony. The Congress was, in this, the International Year of Crystallography, a great success from the CCDC’s point of view. The next Congress will be held in Hyderabad, India, in 2017 – surely an event which will have a strong local flavour and one which I am anticipating eagerly.