​With the holiday season finally behind us, the usual routine is returning to work at the CCDC. The CCDC window cleaner, Steve, visited today. Gazing idly though my now clean window at Steve, up his ladder, my mind wandered to ladderanes, a rather unusual group of supramolecular structures containing two or more edge-sharing rings of cyclobutane.

These molecules were first synthesised for use in the field of molecular design; as these rigid, highly-strained molecules (along with other types of ‘rigid molecular racks’) allowed the exact positioning of various functional groups for the study of electron- and energy-transfer processes.

These ladder-like molecules soon gained further attention, however, when it was reported in a publication in 2002 (doi:10.1038/nature01128) that nature had got there first. Ladderane-type structures were found in anaerobic ammonium-oxidizing (anammox) marine bacteria. It is suggested ladderane-type lipids help increase the density of a particular anammoxosome membrane to form a barrier against diffusion of toxic molecules, produced as the bacteria derive their energy.

As you may imagine, such molecules are difficult to characterise, however there are several examples of ladderane structures deposited in the CSD. These ladderane molecules have 3-5 fused rings making up the rungs of the ladder, just like those found to occur naturally. The unusual molecular structure and the helpful name for these types of molecule make them easy to find in the CSD. Also, exploring other CSD features, such as the similarity search option available in WebCSD, it’s possible to find examples of other supramolecular structures that may be of interest. I’d be interested to learn the views of other CSD users – is there anything else you’d like to help you find the structures you need? As always, you can get in contact with us via Facebook, Twitter, or through this website to let us know your views. 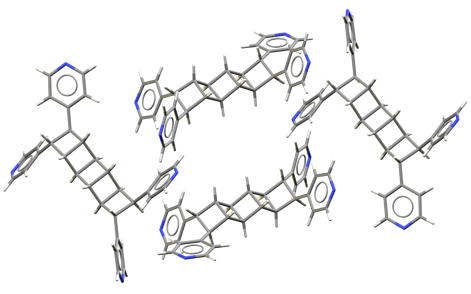 Image of a unit cell from the (5)ladderane molecules present in CSD refcode IRUBUT (solvent molecules not shown).

The figure above shows a typical such ladderane molecule. As you can see, despite the name such molecules probably wouldn’t be much help for a molecule-sized Steve the window cleaner, with a corrugated conformation due to fully saturated carbon atoms of the ‘ladder’.