The importance of MOFs

Although the term MOF was only coined in 1995, they have already erupted as a class of materials, both in the number of structures and applications reported.

As the geometry, pore size, porosity, surface area as well as functional groups and other characteristics can be highly customised by the synthesis route, MOFs have been considered against a wide range of applications. Most applications of MOFs relate in some way to the filtering or encapsulation of other molecules – indeed their highly porous structure led Inokuma et al. to coin the term “crystalline sponge”.

To date, applications of MOFs in use and under investigation include microelectronics, fuel storage – including hydrogen storage, CO2 capture, catalysis, absorption of pollutants, water desalination, drug delivery and protein encapsulation.

The interest in MOFs spans both academic and commercial researchers – with BASF named as the global leader in MOF research and production in the 2021 MOF Market report. This same report predicts that the worldwide market for MOFs will continue to grow at a healthy rate, reaching 410 million USD in 2023 from just 70 million in 2017.

This underlines that MOFs have already moved beyond early stage investigation – they are very much present in modern materials being developed and produced at scale. 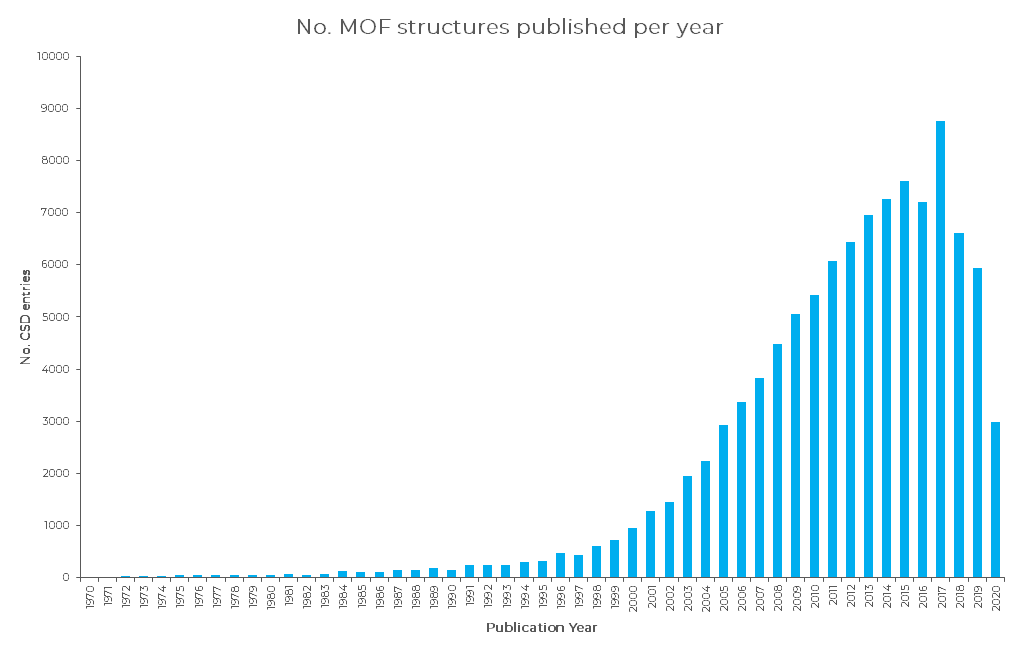 Graphs showing the number of MOF structures published each year since 1970, and the percentage of MOFs in the CSD each year. These illustrate the growing popularity and understanding of this important class of materials.

With such a large and varied number of MOF structures reported, developing a way to define and categorise these for searching and screening is vital.

Our recent paper in Chemical Science “Targeted classification of metal-organic frameworks in the Cambridge Structural Database (CSD)” describes the new approaches we have taken to facilitate easier searching and data-mining of MOFs.

Briefly, the 99,000 MOF structures which are in the CSD MOF subset as of January 2020 have been classified in terms of crystalline properties including metal-cluster, network and pore dimensionality, surface chemistry and chirality. With these classifications in place, queries can be run to quickly find MOFs that fulfil particular chemistries. The paper also demonstrates their use by performing a high-throughput screening for MOFs that could be used in hydrogen storage at room temperature.

Read the full paper here, or learn more about the CSD (including the proportion of MOF structures it contains) here.

Note that in the intervening months since submission of the paper, the size of the CSD MOF subset has grown to 103,951 structures as of August 2020!

Edit 4th March 2021: note that we have now launched the CSD MOF collection of over 10,000 MOF structures free for use in academic research. Learn more and download here.