CCDC > Blog > CSD in action: Novartis and NanoMEGAS. Analysis of the metastable polymorph of Loratadine

CSD in action: Novartis and NanoMEGAS. Analysis of the metastable polymorph of Loratadine

Here we spotlight a recent publication which shows how CSD data supported a team from Novartis and NanoMEGAS to analyse a metastable form of the antihistamine drug Loratadine. Part of our series highlighting examples of our data and software in use around the world.

Metastable polymorphs of pharmaceutical compounds are of interest in the industry, but they are often hard to analyse by x-ray diffraction. In this work the authors used electron diffraction and density functional theory, with data from the CSD to validate their findings, to characterise the structure of metastable loratadine form II. 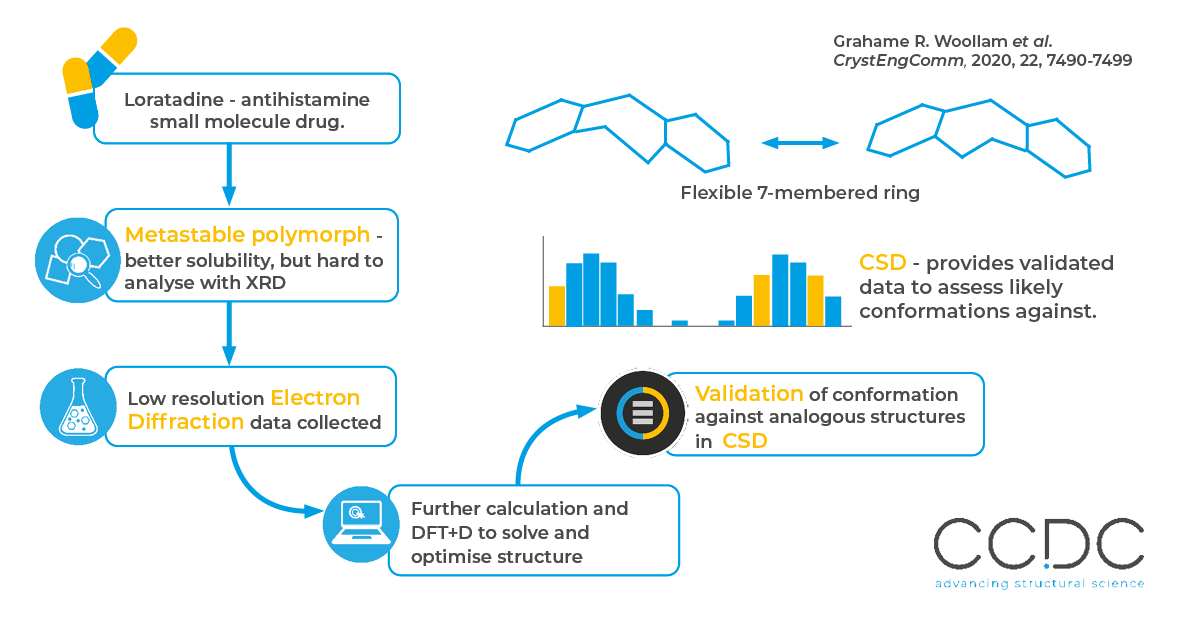 Many compounds can crystallise in different forms, or polymorphs, and this can have a big impact on properties like stability, solubility and mechanical properties. Since metastable polymorphs typically have better solubility, pharmaceutical companies are motivated to isolate and characterise them. Their metastable nature means it is hard to form a large, single crystal to analyse by X-ray Diffraction (XRD), so researchers turn to alternative techniques like Electron Diffraction (ED). However, the limited resolution of ED makes it difficult to fully solve the structure, so additional validation through density functional theory and comparing to XRD structures found in the CSD are used to validate the ED findings.

Loratadine was recrystallised to form II, the metastable polymorph, and this was validated by powder diffraction. Low resolution ED data was collected, and refined by simulated annealing and energy minimisation with DFT+D to determine and validate the structure. The conformation, intermolecular interactions and crystal packing found in analysis were validated against structures found in the Cambridge Structural Database. This was especially important for the flexible seven-membered ring, which was validated against over 7,000 experimentally derived results of similar structures to confirm that it's "twisted boat" conformation was within typical torsions seen in analogous structures.