Here we highlight a paper by authors at the Key Laboratory of Pesticide and Chemical Biology at the Central China Normal University who used GOLD to rationalize structural modifications of novel HPPD inhibitors for herbicides. This is part of our series highlighting examples of​​ the Cambridge Crystallographic Data Centre (CCDC) tools in action by scientists around the world.

In this paper, researchers used GOLD, CCDC’s protein-ligand docking software to rationalize structural modifications of a new class of p-hydroxyphenylpyruvate dioxygenase (HPPD) inhibitors with potential use as herbicides.

The researchers first designed a family of benzyl-containing triketone-aminopyridines and then used GOLD to identify the binding modes. They generated a total of 300 conformations for each compound, and the best conformations, selected based on the complex of the HPPD with the commercially available inhibitor, mesotrione, were evaluated with additional computational methods. An optimization program was then carried out relying on systemic SAR investigation and binding mode analysis. The most promising compounds were then synthesized and their performance tested against the commercially available HPPD inhibitor. This work resulted in: 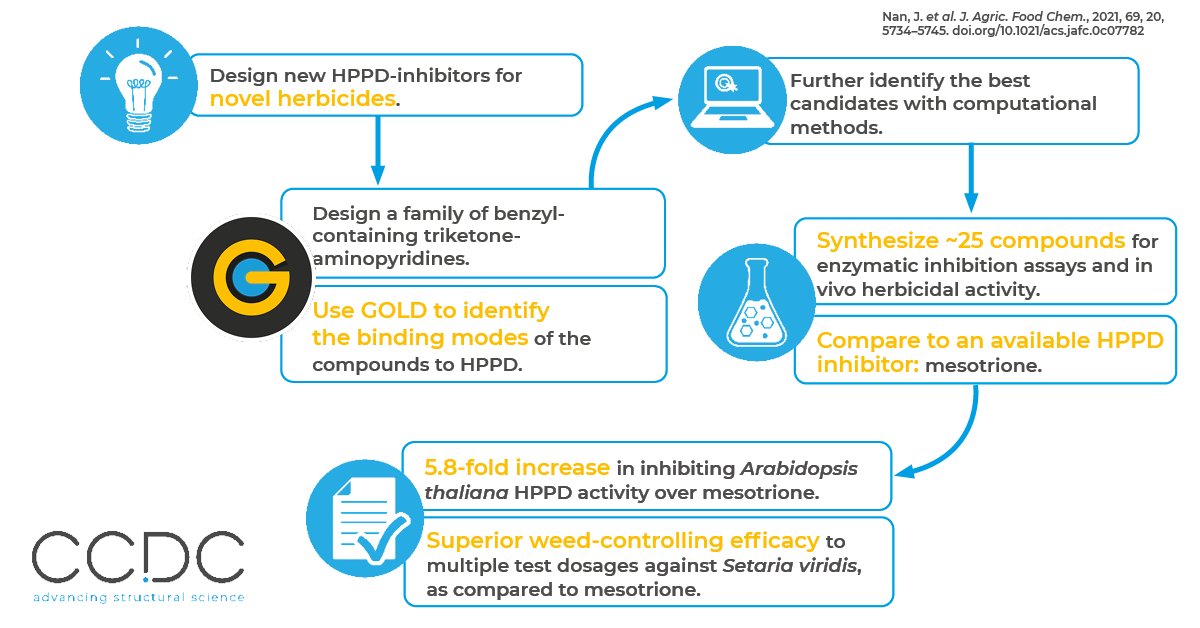 HPPD plays a pivotal role in the tyrosine degradation pathway, which, in plants, results in a key enzymatic product important for photosynthesis. Mesotrione is a common organic compound used as a selective herbicide that works as an HPPD inhibitor. To design their novel HPPD inhibitors, the researchers first obtained the crystal structure of the bound HPPD−mesotrione complex from the Protein Data Bank (PDB ID 5YWG) to better understand the interactions between the HPPD inhibitor and its target. Then they used GOLD to determine the binding poses of the new compounds with HPPD, the best of which were evaluated with additional computational methods, like binding free energy calculations and energy decomposition. Finally, they synthesized a subset of those compounds and tested them with enzymatic inhibition assays and in vivo herbicidal activity analyses against noxious weeds, like Echinochloa crusgalli, Setaria viridis, Abutilon
theophrasti, and Chenopodium serotinum. Mesotrione served as the positive control.

By first leveraging computational methods with GOLD, the researchers could focus synthesis and in vivo testing on compounds most likely to be effective. Moreover, with the analysis of the binding modes, they were able to identify the role π−π stacking interaction may play in the improved activity observed in the high-performing compounds.

HPPD plays a pivotal role in the tyrosine degradation pathway, which, in plants, results in a key enzymatic product important for photosynthesis. According to the researchers, over the past 30 years, a substantial number of HPPD inhibitors have been commercialized and are in wide use due to low application rates, low toxicity, low resistance risks, and benign environmental effects. However, applications are often limited to cornfields and the herbicides have a narrow control spectrum for gramineous weeds.

Learn how GOLD can improve your structure-based design research, including lead optimization and binding mode identification.