Here we highlight a paper by researchers at Tianjin University using the Cambridge Structural Database (CSD) and CSD-Materials to identify coformers to prevent the hydrate conversion of the pesticide pymetrozine (PMZ). This is part of our series highlighting examples of​​ the Cambridge Crystallographic Data Centre (CCDC) tools in action by scientists around the world.

PMZ is a nonbiocidal pesticide with special selectivity for certain pests. However, it lacks humidity stability and has low water solubility. For example, it is known to spontaneously convert to its hydrate form at high relative humidity.

The researchers employed a combined method of COSMO-RS and CSD analysis via Mercury – completing a coformer screening on 39 compounds for multicomponent crystal formation with PMZ. 13 coformers were derived from the calculation for experimental screening, and nine of those proved to generate new solid phases. Among those, seven single crystals of PMZ multicomponent solids were obtained and improved humidity stability and water solubility were verified. 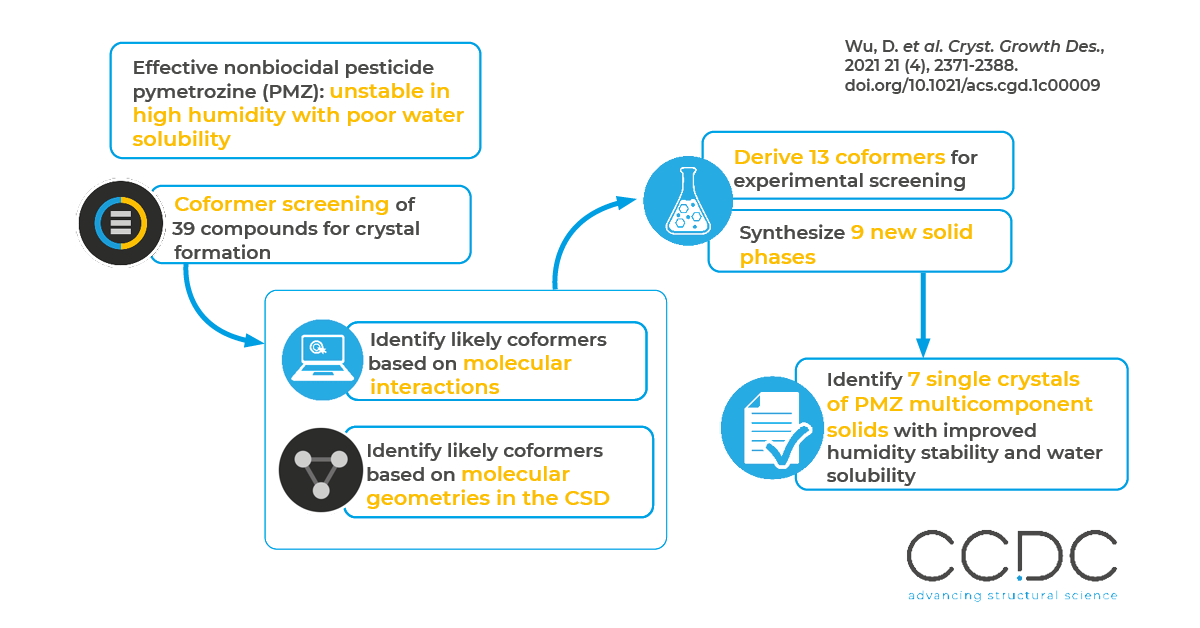 The two-pronged screening process the researchers used reduced the number of experimental trials needed and shortened the synthesis process – enabling the identification of multicomponent crystal forms that preserve PMZ’s molecular structure. Such forms are needed because while PMZ has high efficiency, low toxicity and high selectivity, it suffers from low water solubility and poor humidity stability. When the relative humidity is higher than 70%, PMZ will spontaneously convert to its dihydrate. Changes in relative humidity during transportation and storage can also cause the formation, decomposition and dissociation of hydrates. This affects PMZ’s physicochemical properties, like its stability, solubility, wettability and powder flow property.

PMZ has unique toxicological characteristics that inhibit insects from feeding in a very specific way – making it great at controlling pests with piercing and sucking mouthparts. Such insects cause measurable damage. For example, the researchers report that the brown planthopper causes more than $300 million in annual losses of rice production in Asia. And another, Aphis craccivora, is found in 50 host plants of 19 families. It is considered a global threat to Leguminosae plants.

The researchers considered two major design factors in crystal engineering for their calculated work: intermolecular interactions and molecular packing. They employed the COSMO-RS approach to preselect coformers based on molecular interactions, like hydrogen bonds, van der Waals forces and electrostatic interactions. They used the molecular complementarity tool to complete a CSD analysis of molecular geometry to identify coformers with close spatial packing. Using a statistical correlation analysis of cocrystals in the CSD, the researchers looked for molecules with similar shapes and polarities, which included the fraction of nitrogen and oxygen atoms, the dipole moment and three simple shape descriptors based on a molecular bounding box. Coformers with the potential to form cocrystals or salts with PMZ as selected by the COSMO-RS and the CSD calculations were considered for experimental screening

Seven multicomponent crystals of PMZ were synthesized and characterized by powder X-ray diffraction (PXRD). Their patterns – simulated by Mercury according to their single crystal structures and experimental measurements – were then compared with PMZ’s pattern and with the PXRD patterns of the coformers. This verified the formation of new crystalline phases. Dynamic vapour sorption (DVS) experiments and equilibrium solubility measurements confirmed improved humidity stability and water solubility. Density functional theory (DFT) calculations were further employed to explain the variations in physicochemical properties on the atomic scale, which may help inform future design efforts.

Learn more about how CSD-Materials can help you analyse intra- and intermolecular interactions to better understand a material’s behaviour and refine its properties.