This is the first blog in our CSD Educators series and I am delighted to introduce Greg Ferrence - @FerrenceG - from Illinois State University. In our CSD Educators series we will be hearing from lecturers and teachers about some of their experiences in education and their journey to using the Cambridge Structural Database (CSD).  We wanted Greg to launch this series because not only has he used the CSD at his institution, but he has helped the CCDC shape our own educational resources and if that wasn’t enough he is currently doing a virtual sabbatical with us. We asked Greg to tell us about how he has used structural data to help inspire a new generation of scientists, his long standing collaboration with the CCDC and his journey to having a guest editor slot on our popular #FeaturedStructureFriday social media campaign.

Hello from Normal. I am Professor of Chemistry Gregory Ferrence, from Illinois State University (ISU) in Normal, Illinois, USA, and the 2020 CCDC Virtual Sabbatical Faculty Fellow.  What’s a Virtual Sabbatical Faculty Fellow?  For me it’s an opportunity derived from an academic sabbatical, planned a year ago to involve physical travel to Europe, that events of 2020 disrupted.  Beyond that, it’s evolving daily.  Perhaps you will find the following backstory and contemporaneous narrative informative, perhaps even useful.  It should at least eventually explain why you will be seeing me as guest editor/author for several upcoming #FeaturedStructureFriday CCDC posts on Facebook and Twitter. 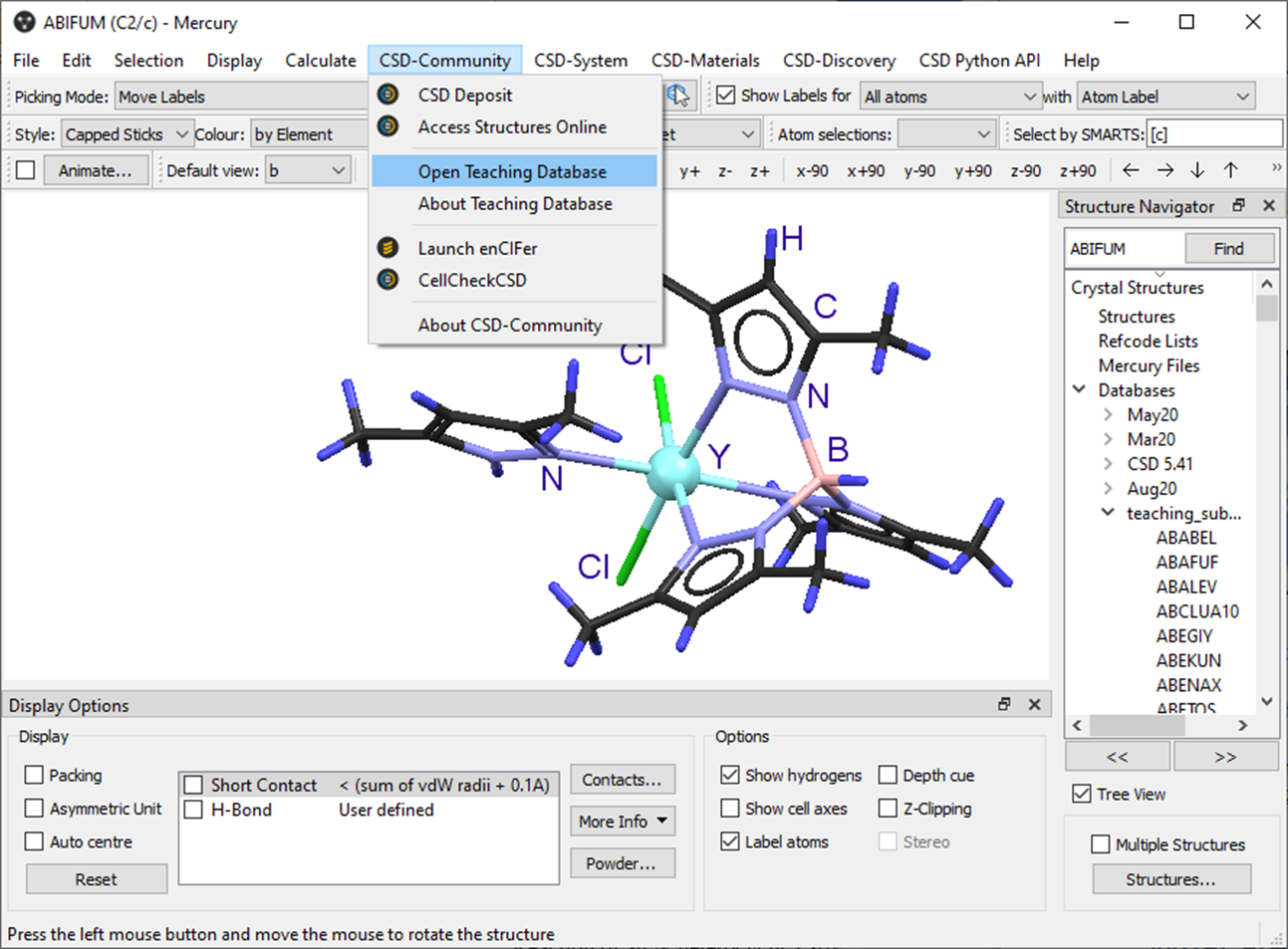 With support from the U.S. National Science Foundation, I worked with the CCDC to provide two years of faculty training and full access for Chemistry Departments at dozens of U.S. Community Colleges and Primarily Undergraduate Institutions.  This collaboration helped us better understand how the CSD could be utilized to teach chemistry students.  We improved the teaching subset to include about 400 entries, developed some teaching materials, and wrote some papers, including a series of five Journal of Chemical Education articles.

Starting the collaboration with the CCDC

Full disclosure, I have been a CSD user for at least 25 years and have been collaborating with CCDC scientists for over 15 years and have made the Normal to Cambridge and back to Normal journey about a dozen times.  I think it was the fall 2005 American Chemical Society national meeting in Washington, DC where plans for collaboration were hatched while I visited the CCDC booth.  We mutually recognized the CSD and its software were world class research tools that could be leveraged to enhance chemical education.

We soon produced a “teaching subset” of several hundred carefully selected CSD entries to maximize teaching opportunities.  The teaching subset was later embedded into Mercury so that it remains freely accessible, even without a subscription to the full CSD.

Here I must concede a bit of jealousy. I was involved in the first four, but it was the fifth whose artwork graced the Journal’s cover. 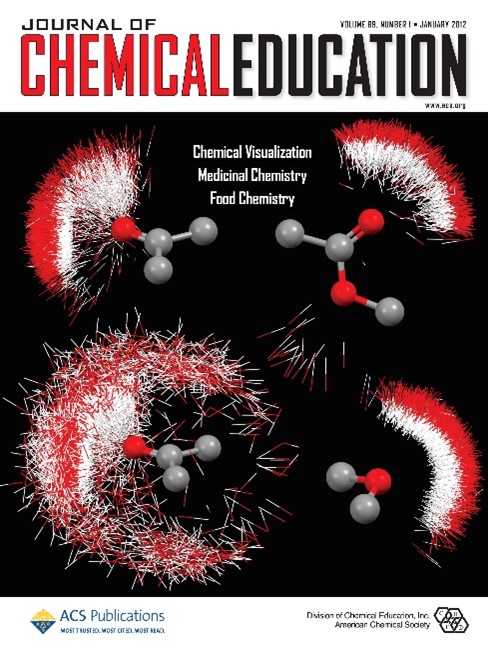 Front cover of the January 2012 edition of the Journal of Chemical Education featuring an image based on the teaching subset article in the same issue DOI: 10.1021/ed200139t

During the spring of 2014, I spent my second sabbatical in residence at the CCDC.  Shortly after my arrival in the UK, I had the opportunity serve as an official delegate and attend the International Year of Crystallography opening ceremonies held at UNESCO (United Nations Educational, Scientific and Cultural Organization) headquarters in Paris, France.  Surreal is the best description I can offer, surreal translation headset and all.

Photo from my time at the International Year of Crystallography opening ceremonies held at UNESCO (United Nations Educational, Scientific and Cultural Organization) headquarters in Paris, France

I was embedded with the team of database editors and spent a significant amount of time learning about and discussing the rapidly evolving validation and curation processes of the CSD. With the excitement generated with IYCr2014, I worked on examining a historical perspective of crystallography through the lens of the then roughly 700,000 entry CSD.  I even had the opportunity to contribute to the CCDC newsletter, providing a still relevant “Illumination of the deposition process”. /News/newsletters/13-may_14.pdf

My last “trip across the pond” and visit to the CCDC was in 2015, during the CSD50 celebration where I had the honor of speaking about “Permeating the CSD into chemical education” alongside a venerable slate of distinguished scientists describing the CSD through their many lenses.  See https://info.ccdc.cam.ac.uk/csd50-presentations.

The 2020 sabbatical morphs to a virtual sabbatical

Merriam Webster defines sabbatical as: a period of time during which someone does not work at his or her regular job and is able to rest, travel, do research, etc.

Occasionally my wife reminds me of the specific priority order of the tasks in that definition.

Academic sabbatical proposals, at least at ISU, are submitted a year or so before the requested start date.  This means I submitted my fall 2020 sabbatical request during September of 2019.  Final approval occurred in early 2020. The plan included attending the fall 2020 ACS national meeting in San Francisco, attending the fall 2020 IUCr Congress and General Assembly in Prague, Czech Republic, and attending Pacifichem 2020 in Honolulu, Hawaii.  The proposal mentions vague plans to interact with folks at the CCDC.  At the time, I was hoping to rekindle collaborations; however, my plan was to explore specific “opportunities” through perhaps face-to-face discussions at the spring 2020 ACS national meeting in Philadelphia, Pennsylvania.  I was hoping to make at least a short visit to the CCDC during fall 2020.

Throughout the fall I mulled over how to establish new and meaningful collaborations with the CCDC.  It struck me (still strikes me) that CSD Communications are a minimally showcased resource within the CSD. Somehow from this mother liquor of thousands of orphaned structures crystalized a plan to post daily tweets showcasing specific CSD Communications. I converged on a few self-imposed rules.  Each tweet should:

And perhaps naively, I set out to showcase a different CSD Communication every day for one year.

An animation showing CSD Refcode JAHWEU, one of the earliest CSD Communications in the CSD

The first Tweet in the series debuted on February 1, 2020 and featured 2,7-Dimethoxy-1,8-bis(dimethylamino)naphthalene (CSD Refcode: JAHWEU). Its structure’s 1976 publication year makes it the oldest “CSD Communication”).  October 7, 2020 was the series’ 250th day of consecutive daily Tweets.  One must dig deep to come up with something new and interesting every day.  Some days succeed more than others.  Certainly, I have “discovered” many features in Mercury, plenty of which have been hidden in plain sight, right in front of me for years.  It’s impossible to say how the project would have progressed had 2020 unfolded differently, but with pandemic imposed isolation and lifestyle disruption, spending evenings exploring, rendering, and Tweeting about CSD Communications has proved a useful personal distraction.

As 2020 meetings were moved, virtualized, or canceled and professional travel plans evaporated, my sabbatical plans pivoted.  In mid-March ISU transitioned all instruction and nearly all work to remote and online, the spring ACS meeting was cancelled, and the April CCDC User Group Meeting (which I was set to attend) shifted to an online format.  Without boring you with details, the summer closed with CCDC colleagues suggesting we explore the concept of a “Virtual Sabbatical”.  The digital nature of the CSD and its tools is fundamentally virtual, and with most CCDC personnel (and me) working remotely, so far, the virtual sabbatical is an excellent response to 2020.  It’s sad to lack the face to face conversations and interactions, and the travel, but the virtual sabbatical also facilitates lots of opportunities.  Some of the plans/projects for the virtual sabbatical include:

If you have suggestions or thoughts regarding any of these projects, I would enjoy hearing from you. Email me at gferren@ilstu.edu. I still need more than 100 ideas for daily #CSDCommunication Tweets!