It is my pleasure to welcome Professor Dean Johnston from Otterbein University for our next entry in the CSD Educator series. Dean is an avid user and champion of the CSD, from his experience as a graduate student growing crystals to integrating the CSD in his lectures in inorganic chemistry. Dean developed the Symmetry@Otterbein online resource to showcase structures with interesting symmetry; a resource that has since been included in the Database of Crystallographic Online Resources (DECOR). In 2016, scientists from the CCDC facilitated a workshop at Otterbein University where Dean had free access to his school’s 3D printer which provided an opportunity for every attendee to design and print out a 3D model.

My introduction to the CSD occurred way back when I was a first-year graduate student. I had just prepared a beautiful collection of jet-black crystals and was very excited to bring them to the crystallographer. These were air-sensitive iron and cobalt carbonyl clusters – part of what I was sure was going to be a very productive project. The crystallographer carefully indexed the crystals and then double-checked against the CSD. As some may recall, back in those days the average data collection took about three days, so searching the CSD was an important step. Well, it turned out that my crystals were a known structure (CUBCIL), having been published four years earlier by our own research group! A rude introduction, to be sure, but one that demonstrated the value of having a database such as the CSD.

Symmetry and the CSD

Fast-forward fifteen years and I am a professor at Otterbein University who had just received funding from the National Science Foundation to develop and expand my online materials for teaching symmetry (Symmetry@Otterbein). As I was creating the site, I wanted to include the widest possible variety of molecular structures including molecules with "interesting" symmetry. I found CSDSymmetry, the collection of molecular and crystallographic symmetry information compiled by the CCDC. This discovery was like striking gold when searching for some of those more esoteric point groups like S4 and Th. As I have modified and expanded the site over the years, I continue to add examples based on user suggestions, many of which are drawn from the CSD. Out of the approximately one hundred twenty molecules currently shown on my site, eighty have links to their respective entries in the CSD or ICSD. Some of my favorites include a thorium compound with Th symmetry (GOBTAS) and a cobalt hexacyclen complex in the S6 point group (BIGNOU01). 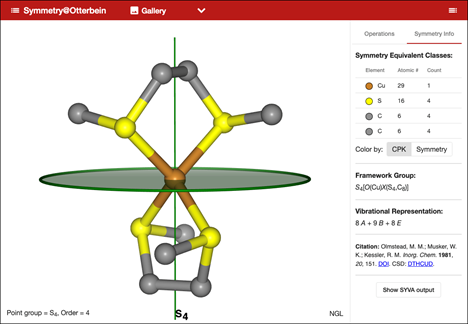 The CSD in Teaching

Sometime in 2008, I received an email from Dr. Gregory Ferrence, telling me about an opportunity that would allow me to incorporate the full CSD into my courses. Until that point, the CSD was something that I thought of for research or special applications. Greg was an enthusiastic and effective CSD "evangelist", showing the many ways that structural data could educate and provide context for my students. Having full access to the CSD changed how I approached many topics in General and Inorganic Chemistry from "this is how we describe the structure and bonding" to "let's explore and see if the data (in the CSD) support how we think about structure and bonding". I am continually looking for ways to demonstrate the concepts I teach with examples from the database. Whether it's VSEPR in General Chemistry or crystal field stabilization energies in Inorganic Chemistry, having specific data-driven exercises benefits the students and provides a more authentic experience of how science works.

I was able to spend a productive sabbatical in 2017 working with Dr. Amy Sarjeant and others at the CCDC. During that sabbatical I learned a great deal about the CSD Python API. I have since used the API to support several undergraduate research projects. I have also been looking for ways to incorporate the programmable aspects of the CSD into my teaching. The recent addition of "Coding for Chemists" and "Intro to Cheminformatics" courses at Otterbein (starting Fall 2021) will incorporate the CSD Python API along with other relevant cheminformatics tools. I am excited to offer these courses and to find even more ways to incorporate the CSD into our undergraduate curriculum.

Just this semester, in part due to current pandemic, I have implemented a new laboratory exercise where my students prepare a copper(II) paddlewheel-based metal-organic framework (MOF). I paired the laboratory exercise with an online activity where we explored various properties of MOFs, included the one we prepared, using the CSD MOF Subset Explorer. I had learned about this amazing resource from a talk given by Dr. David Fairen-Jimenez as part of the "Behind the Paper" series jointly organized by the CCDC and CrystEngComm. Working with this website gave students an overview of some of the important properties of MOFs along with a sense of the scale of the field and where this particular MOF fits into the larger picture.

I love to hear how others are incorporating the CSD into their teaching. I continue to update and enhance the Symmetry@Otterbein site, so feel free to suggest any new features or a favorite molecule you would like added to the list.