The renovation at the CCDC building in Cambridge started in 2019. Artwork to educate and inspire our team and visitors on the theme of crystallography was a key requirement.

The main goal was to enhance the qualities of the building, have comfortable and modern working areas and also feature social and creative spaces for collaborative work. From the beginning, it was clear we wanted to represent our mission around the building. We invited Clare Crouchman, an artist from Cambridge, to create artwork that would inspire viewers on the topic of crystallography and structural science. Clare understood very well what the building represents for all of us and our community, and has created astonishing pieces of art that fit the CCDC’s mission and vision. Here, Clare describes in her own words her creative process. 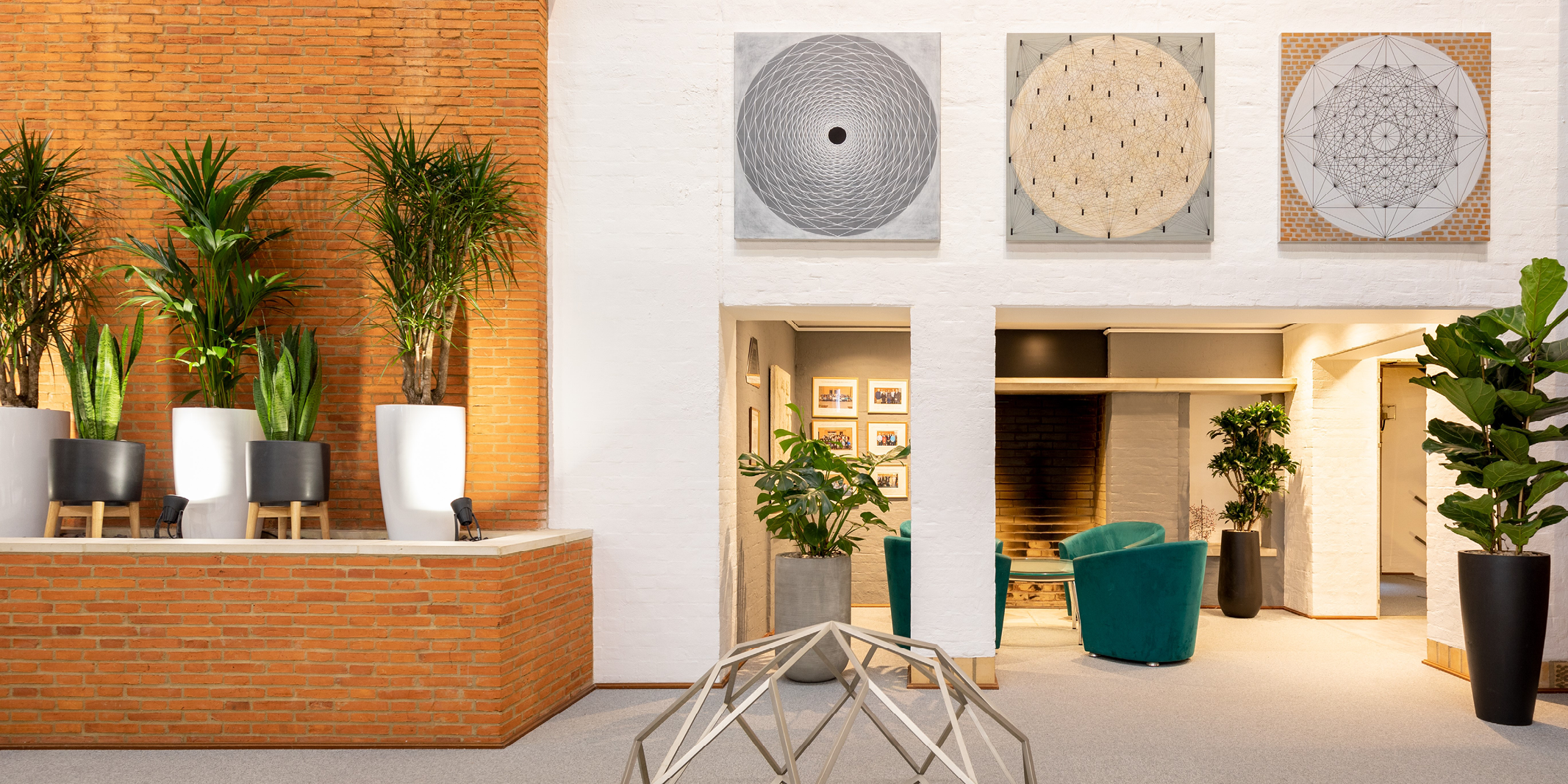 When I was asked to create the six large artworks for the Cambridge Crystallographic Data Centre I was very excited. I have always enjoyed patterns that reference science and mathematics in a very intuitive way. I immediately knew that I wanted to create work that referenced some of these patterns and structures whilst reflecting elements from the amazing building itself, which was designed by Danish architect Erik Christian Sorensen.

After a few Zoom meetings with Alex Moldovan and Andy Widdess, the ideas for the two floors started to form. Each of the six pieces I have created presented a challenge in the scale, the designs and using new media.

For the first floor, I wanted to use large square panels and create geometric mathematical designs in the three pieces. I also wanted to draw on some of the architectural features. The colours are warm and come from the brickwork, the wood and the large circular table. The unusual geometric structure that covers a circular hole in the floor is reflected in the first piece. The colours and shapes of the second piece reference the distinctive decorative brickwork in the facing wall and other parts of the building. Finally, the last piece draws patterns from the other brickwork and warmer tones from the wood combined with the neutral greys.

For the second-floor pieces, I wanted to reference the work that the CCDC does. I have endeavoured to distil patterns and ideas in a way that reflects the processes without being an exact scientific design. They all have subtle light-reflecting particles mixed into the paint as well as shapes that glow in the dark.

The first piece represents a crystalline object. Facets and connections form the basis of the pattern, and using layers of different tones and textures I hope to bring in a feeling of depth. The pale blue shapes have light-reflecting particles added.

In the third piece, I have drawn upon the patterns of chemical structures. The background incorporates shapes from some electron density maps created by Dorothy Hodgkin in 1945. This is a reference to all the famous female crystallographers, including Olga Kennard who founded the Cambridge Crystallographic Data Centre in 1965.

The actual process of creating the work was very interesting. Six paintings all at once is overwhelming and daunting, so I had to break everything down into separate steps. After initial research and experimentation, it soon became clear that it was only whilst working on each step that the next action or idea was revealed to me. I had to simultaneously remain focused whilst also allowing the process to intuitively develop. This feeling of being in the flow is common with all creative endeavours in every field of work and also reflects life in general. 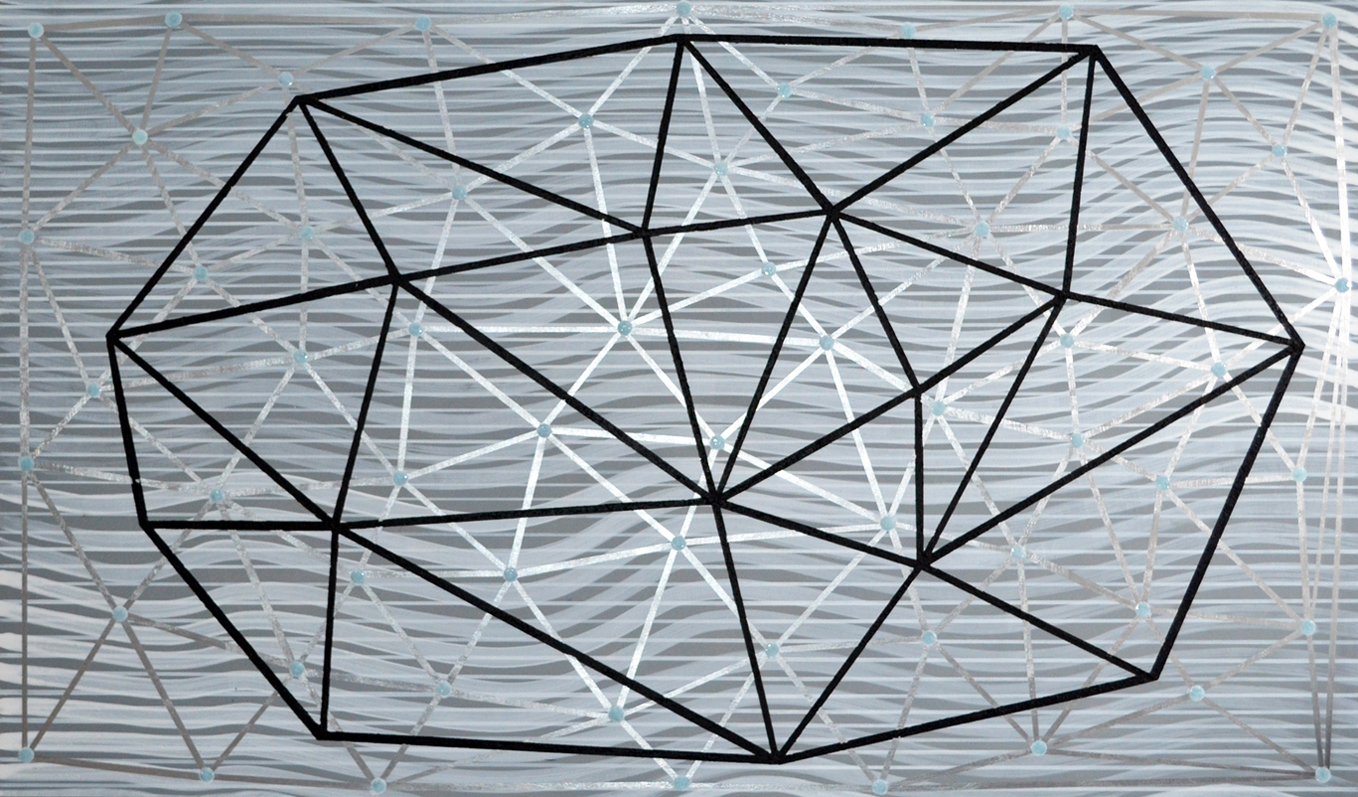 Although the pieces are quite structured, geometric and scientific in design, they are very much created by hand. They are not perfect, but there is no such thing as perfection, and I hope that the human hand of the artist can be present in a scientific world of data.

I am pleased with the pieces I have made and how they look now that they are installed. I hope that you enjoy looking at them and that they do justice to the work you do and to the building itself.

We hope as we adjust to new ways of working to welcome guests back to our building in our future events and user meetings.