It has been known for over 100 years that some compounds can be added to a reaction to speed it up without being changed themselves – this is the principle of catalysis.  The early years saw much of the research into the fundamental kinetics and industrial applications.  This blog will highlight the advancements in catalytic science by looking at selected Nobel Prize winners,1 particularly for organic synthesis, and the contribution of catalysts to the Cambridge Structural Database (CSD).

1909  -  One of the early Nobel prizes on catalysis went to Wilhelm Ostwald "in recognition of his work on catalysis and for his investigations into the fundamental principles governing chemical equilibria and rates of reaction".

1912  -  Victor Grignard “for the discovery of the so-called Grignard reagent, which in recent years has greatly advanced the progress of organic chemistry”.

1918  -  Fritz Haber developed a process “for the synthesis of ammonia from its elements”. This catalytic process became a major industrial route to create fertiliser for the agricultural industry.

1931  -  Carl Bosch and Friedrich Bergius were awarded the prize "in recognition of their contributions to the invention and development of chemical high pressure methods".  With the help of Carl Bosch, the Haber process was scaled up to become what it is known as today - the Haber-Bosch process.  The Bergius process used high temperature and pressure to hydrogenate hydrocarbons for fuel.

In the ensuing 30 years, industrial catalysis expanded especially for catalytic cracking, which enabled the efficient processing of petroleum into fuels and chemicals. Throughout the 1940s and 1950s, catalysts were discovered to produce a range of downstream chemicals.

1963  -  By the 1960s, plastics were emerging, helped by the discovery of organometallic polymerisation catalysts. Karl Ziegler and Giulio Natta were recognized in this area “for their discoveries in the field of the chemistry and technology of high polymers”. This is the well known as the Ziegler-Natta polymerisation that many readers will have learnt about during their studies. 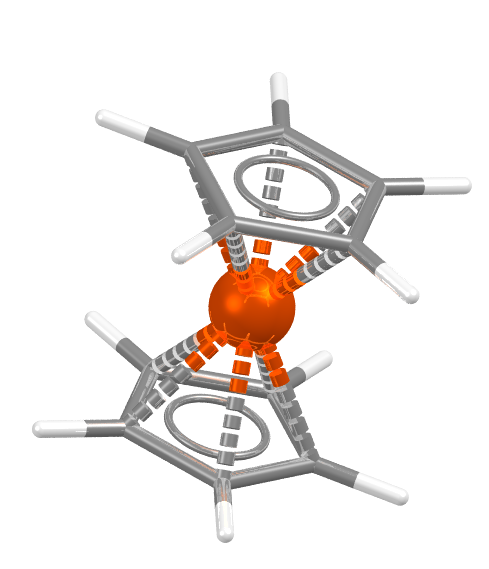 1973  -  Ernst Otto Fischer and Geoffrey Wilkinson were awarded the 1973 prize "for their pioneering work, performed independently, on the chemistry of the organometallic, so called sandwich compounds", which helped decipher how these compounds can function as catalysts. Ferrocene is the most common of these compounds, FEROCE12 below.

The number and diversity of these sandwich compounds have exploded, and I was intrigued - just how abundant are they in the CSD?  A substructure search of the CSD 2020 release for two cyclopentadienyl rings pi bonded to any transition metal finds over 26,800 hits.  The graph below illustrates the growth of metallocene complexes in the CSD – comparing the number added each year and what percentage they make of all the structures added to the CSD that year. I found it particularly interesting that there was a peak just after the Nobel Prize was awarded (arrow), however the main peak of interest in these compounds appears to have been later in the 1990s. 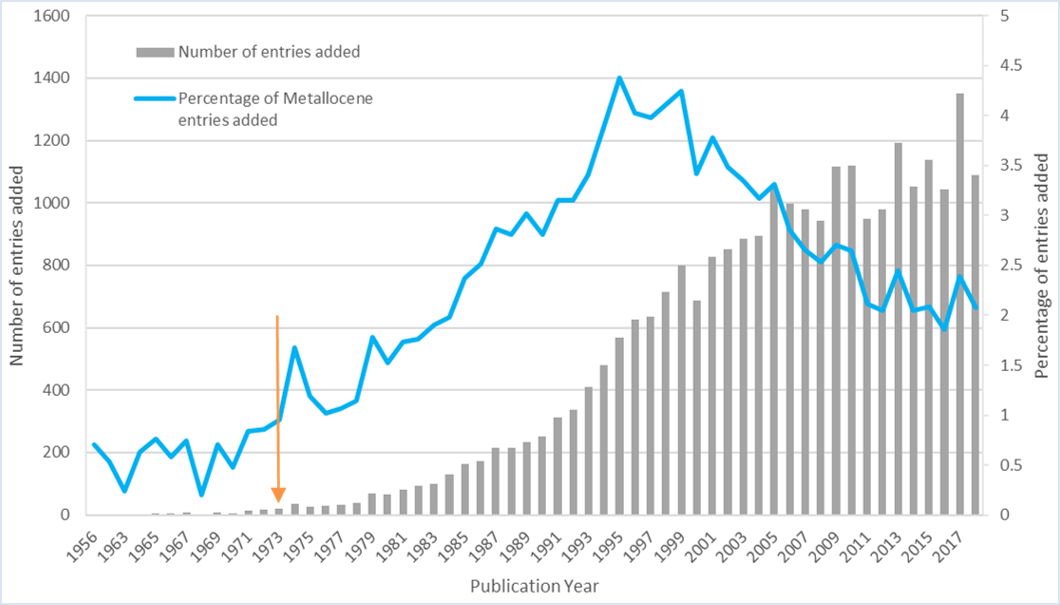 This pair of Nobel prize winners are not just known for their work on sandwich complexes, but both have other claims to fame.  Ernst Otto Fischer is also well-known for the Fischer carbene that is named after him.

Geoffrey Wilkinson on the other hand is also the Wilkinson behind the Wilkinson’s catalyst (below TPPRHC01), which is commonly used for hydrogenation of alkenes and has led to the development of other Rhodium catalysts.  A similarity search of the CSD found 55 structures with a Similarity score above 0.7.2  Could any of these structures with small tweaks from a known catalyst also potentially act as catalysts for the right reaction? 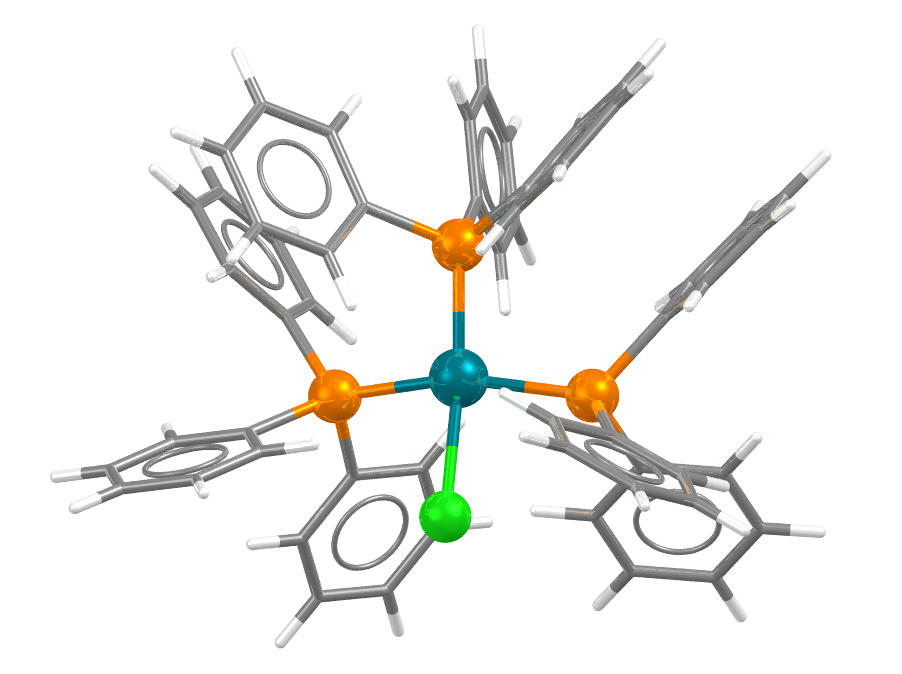 1989  -  It was this year that the role of catalysts in biology was recognised with the prize going to Sidney Altman and Thomas R. Cech “for their discovery of catalytic properties of RNA”.

2001  -  By the time we skip to this century the field had advanced sufficiently that the challenge was for control, specifically for catalysts that had been developed for enantioselectivity.  The Nobel prize in 2001 went to William S. Knowles, Ryoji Nnoyori "for their work on chirally catalysed hydrogenation reactions" and K. Barry Sharpless "for his work on chirally catalysed oxidation reactions".  The work of Knowles built on the work of earlier Nobel prize winner Geoffrey Wilkinson. Knowles achieved enantioselectivity by substituting the triphenylphosphine ligand on the Wilkinson catalyst with a chiral phosphine ligand.  While we are mentioning phosphine ligands, I couldn’t have a blog on catalysis without a quick look at these diverse ligands.  The graph below shows the abundance in the CSD of phosphine ligands, from a substructure search of a simplified trialkylphosphine bonded in a discrete transition metal complex. This has reached a height of over 72,000 entries in the CSD with this functional group, of which 73% aren’t unsubstituted triphenylphosphine and 76% of entries have more than 1 Phosphorus atom in the structure. Therefore, this would indicate that, there is plenty of room for diversity in the phosphine ligands found in the CSD and potentially lots of new complexes that could be investigated.  Trialkylphosphine ligands have been studied with a variety of transition metals, perhaps unsurprisingly with ruthenium and palladium compounds leading the way, as in the pie-chart below. 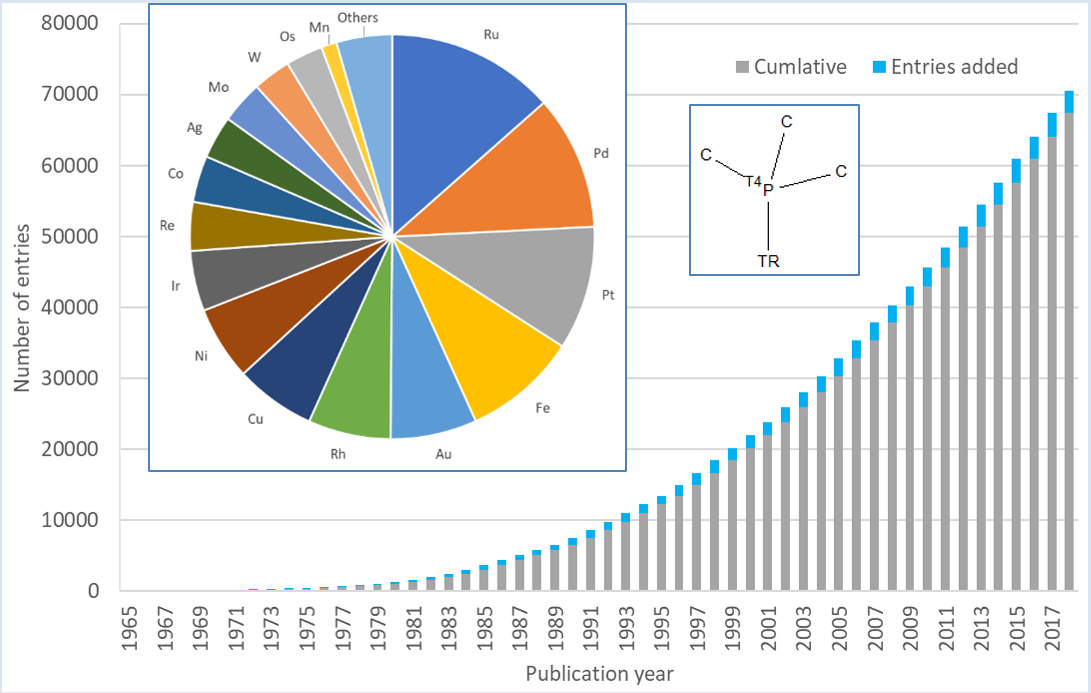 2005  -  The 2005 Nobel Prize for chemistry went to Yves Chauvin, Robert H. Grubbs and Richard R. Schrock “for the development of the metathesis method in organic synthesis”.  While Yves Chauvin helped to decipher the mechanism, Grubbs and Schrock both have transition metal catalysts named after them that are well recognised in olefin metathesis. 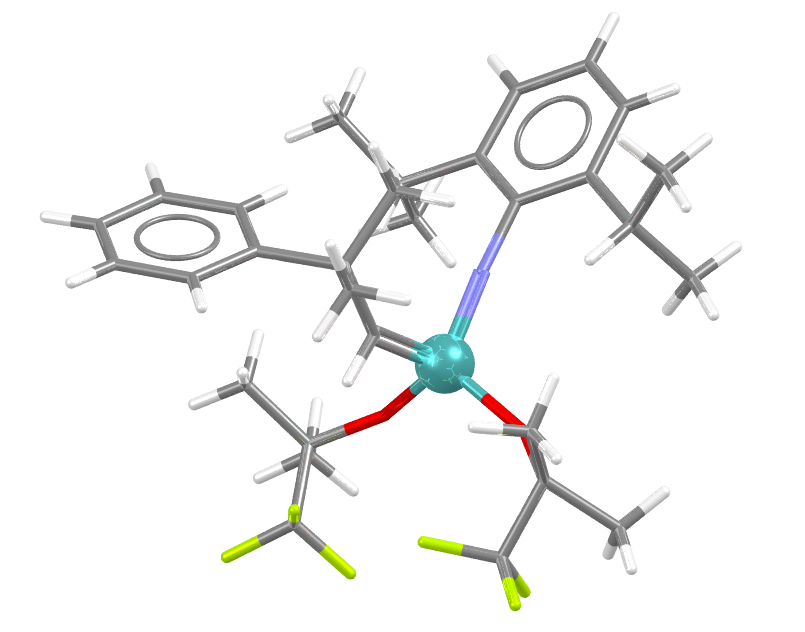 The Schrock catalysts generally contain an alkylidene and an imido ligand with two alkoxy groups on a molybdenum metal centre (above PITJEI).  However, Schrock is not just known for his catalyst, many readers will have heard of the Schrock Carbene that is also named after this Nobel chemist.  Indeed, a search for R.R.Schrock finds him represented in the CSD with 573 entries.

The Grubbs’ catalysts are ruthenium based and have been extensively studied and several distinct generations have now been developed.  I have focused here on the second-generation Grubbs’ catalyst with a substructure search of the CSD using just the generic core as defined below.  This gave 399 hits.   I couldn’t leave the discussion of Grubbs’ second-generation catalysts without mentioning N-Hetrocyclic Carbenes (NHC).  These ligands and their many possible derivatives have seen an increase in attention in recent years.  In the graph below we can see the numbers of entries added to the CSD appeared to peak for second-generation Grubbs’ catalyst-like structures around 10 years ago.  In comparison the number of structures containing the generic NHC-any transition metal sub-structure has taken a step up as interest in its role in many other transition metal complexes has soared. 2010  -  One of the big modern categories of catalysis was recognised with the 2010 prize going to Richard F. Heck, Ei-Ichi Negishi and Akira Suzuki shared this year’s prize “for palladium-catalyzed cross couplings in organic synthesis”.  Cross-coupling reactions have wide applications in their ability to form C-C bonds and enable the precise synthesis of complex organic molecules.  Each of the Nobel prize winners has a reaction named after them; the Heck reaction, Suzuki reaction and, Negishi coupling.  There are many other cross-coupling reactions, some named reactions, that all use a palladium catalyst.  Inspired by the potential of these reactions I was intrigued to see how many non-polymeric palladium containing complexes are in the CSD.  While the earliest palladium structure in the CSD was published in 1955, the number of entries has grown massively, particularly in this century (as illustrated in the graph below).  If we consider a single metal centre catalyst of interest for the purpose of this blog, then over 75% of the palladium entries in the CSD have only one palladium atom in the structure. That’s over 18,000 potential catalysts! 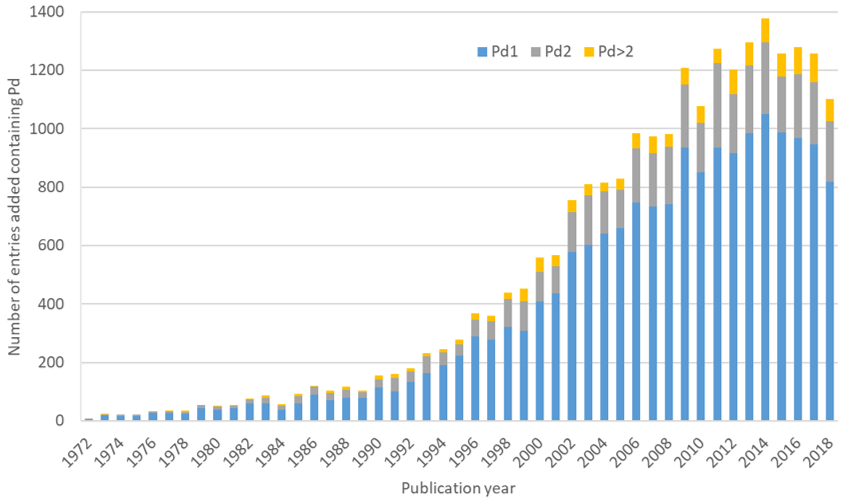 More recently, catalysts using non-conventional compounds have been discovered, although they haven’t (yet) been awarded a Nobel Prize.  Catalysts are not limited to organometallic compounds and there’s a rise in research into the field of organocatalysis.3 An example of using non-traditional elements is in the catalysts used for the synthesis of the CSD1million structure.4  This was determined by a group looking at chalcogen-bonding catalysts for the synthesis of seven-member heterocycles. One of their selenium catalysts, shown below is, 1,2-bis(diphenyl(phenylselanyl)phosphonio)ethane bis(tetrachloro-gallium(iii)) refcode XOPCIR – showing short contacts.  There are also achievements in the development of inorganic based catalysts, such as polyoxometalates5 that are modified with organic ligands, and in green catalysis6. 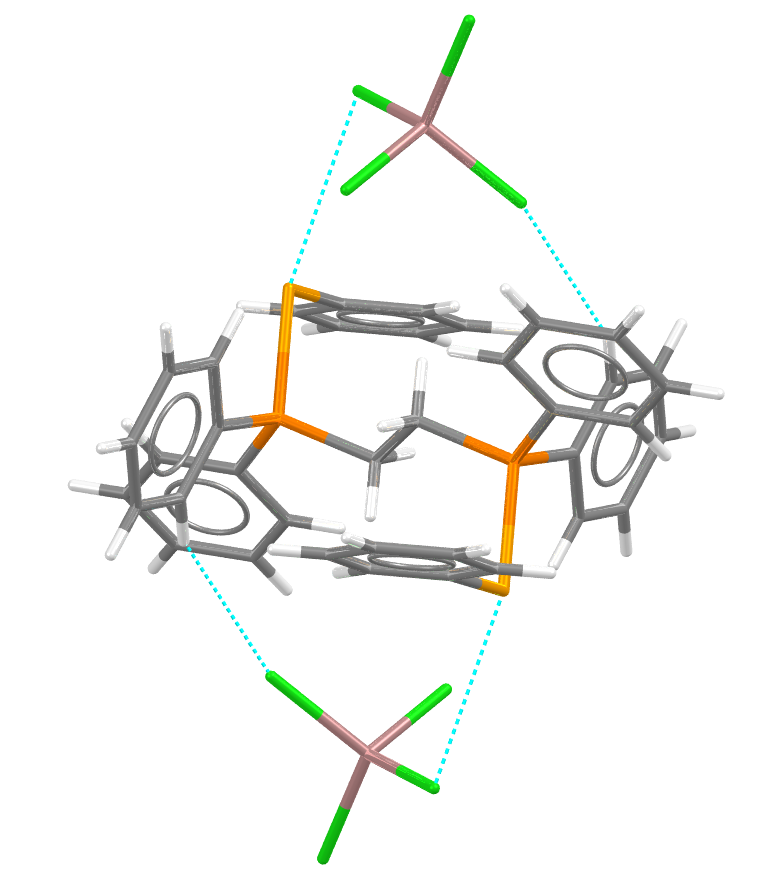 The field of catalysis is diverse in the types of compounds that are studied and therefore the coverage of chemical space.  There are many other important catalytic reactions that I haven’t been able to mention here that are also playing their part in the development of our knowledge of catalysis. One of the questions I asked myself when considering all the compounds in the CSD is can we build on the work of the chemists who came before us and learn from all these compounds to gain new knowledge and better catalysts? The answer to this question is certainly a yes and utilising the wealth of data in the CSD could help to design better catalysts.  To aid research into organometallic catalysis, 2019 has seen the CCDC start its first PhD studentship in this area in collaboration with the EPSRC Complex Particulate Products and Processes Centre for Doctoral Training at the University of Leeds.   You can find out more about this project here. Catalysts have seen many advances in the last century and have the potential to continue to make an impact in helping to improve our world in the years to come. If you are interested in using the CSD to help design new catalysts or you have already used the CSD in this way, we would love to hear from you either on social media or via email (hello@ccdc.cam.ac.uk).