Here we highlight a paper by authors at University of Limerick who used CCDC’s Molecular Complementarity component in Mercury to predict co-crystalization—finding a 24% reduction in the benchtop experiments required to identify the same co-crystals. This is part of our series highlighting examples of​​ the Cambridge Crystallographic Data Centre (CCDC) tools in action by scientists around the world.

The Molecular Complementarity component takes into account both molecular energetic and geometrical factors. Of the two approaches, it performed best. 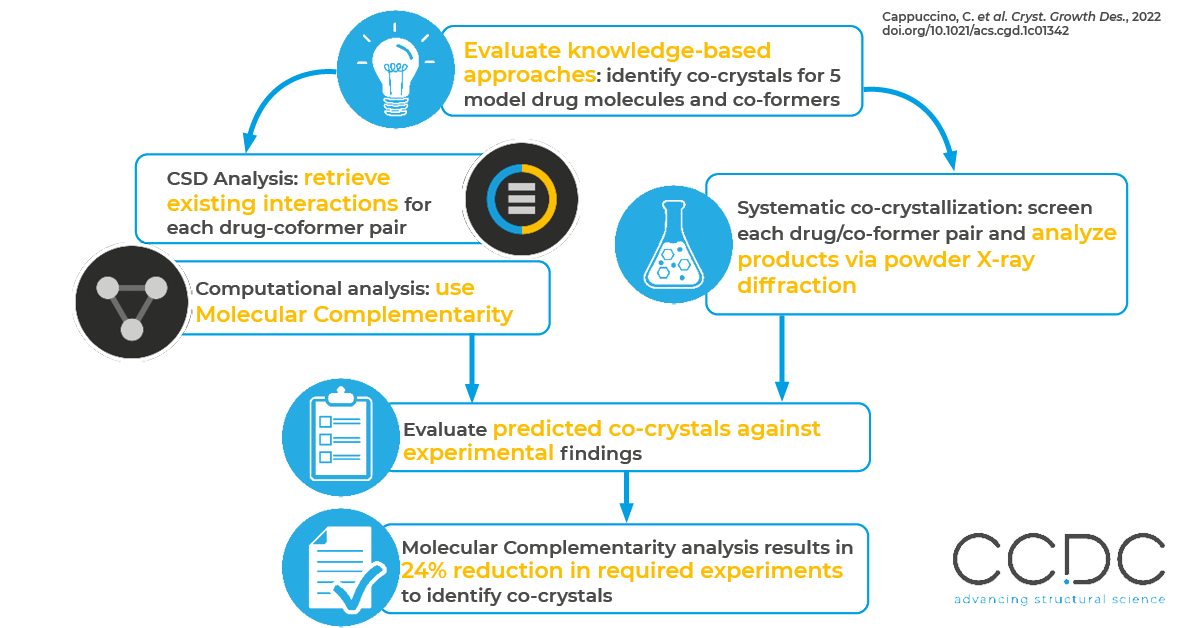 In early-phase drug discovery, researchers attempt to identify polymorphs with suitable stability and beneficial features, like good solubility. Co-crystallization of multiple molecular components can provide additional positive characteristics, improving the bioavailability of potential APIs. However, testing every potential drug-coformer pair at the benchtop in the hopes of finding an advantageous co-crystal can prove costly. A good computational method can help narrow down the number of required experiments, saving time and resources.

First, the researchers selected five drug molecules and five model co-formers for the study. To identify the drug molecules, they searched the CSD for single-component structures associated with the term “drug bank” that contain 20 or fewer carbons—a common threshold for small molecules. To identify the co-formers, they sought compounds with common functional groups with both hydrogen-bond donors and acceptors that are often used in crystal engineering.

To evaluate their predictions, the researchers completed a systematic co-crystallization screening of each drug/co-former pair in a 1:1 ratio. They analyzed the products of each crystalization by powder X-ray diffraction. With the Molecular Complementarity approach (using a threshold of 33% likelihood), they found they could predict 100% of the new crystals while performing only 76% of the experiments—for a 24% reduction in the needed experiments.

Learn how Mercury and CSD-Materials can help harness knowledge-based science to advance your early-phase drug research.